Mary Rice Hasson is the Kate O’Beirne Fellow in Catholic Studies at the Ethics and Public Policy Center in Washington, D.C. She also directs the Catholic Women’s Forum, a network of Catholic professional women and scholars seeking to amplify the voice of Catholic women in support of human dignity, authentic freedom, and Catholic social teaching.

Mary is an expert on topics related to women, faith, culture, family, sexual morality, and gender ideology.  She has been a keynote speaker for the Holy See during the United Nations Commission on the Status of Women for the past three years (2019: “Gender Ideology: Ideological Aggression Against Women and Girls” and “Valuing Unpaid Caregiving: The Human Dimension”; 2018: “The Integral Education of Rural Women and Girls” and 2017: “The Distinctiveness of Women’s Work and Women’s Empowerment”). Mary is a Consultant to the U.S. Conference of Catholic Bishops Committee on Laity, Marriage, Family Life, and Youth. She speaks frequently at national, regional, and diocesan conferences and conducts workshops for Catholic parishes and dioceses on sexuality, gender identity, and pastoral care.

Mary’s writing has appeared in a variety of websites, policy journals, and scholarly publications; she has been interviewed by a wide range of national media and is a frequent commentator on EWTN and Catholic radio.

Mary is the co-author, with Theresa Farnan, PhD, of Get Out Now: Why You Should Pull Your Child From Public School Before It’s Too Late (Regnery: 2018), the editor of Promise and Challenge: Catholic Women Reflect on Feminism, Complementarity, and the Church (Our Sunday Visitor: 2015), and the co-author with Kimberly Hahn of Catholic Education: Homeward Bound (Ignatius Press: 1996). She is also the co-author of the report, What Catholic Women Think About Faith, Conscience, and Contraception (EPPC 2012), co-author of a study on parents’ use of media ratings, published in the medical journal Pediatrics (2011), and the author of a chapter (“What About Sex: Habits of Heart for a Fulfilling Sexual Relationship and a Happy Marriage”) in the recent book, Venus and Virtue: Celebrating Sex and Seeking Sanctification (2018).

Mary was the recipient of the 2019 Humanitarian Award from the Siena Symposium of the University of St. Thomas, and in 2015, Mary and her husband, Kevin J. “Seamus” Hasson, the parents of seven, were the recipients of the 2015 Saint John Paul II Award for the New Evangelization.

A note about the Catholic Women’s Forum:  Taking its inspiration from Pope St. John Paul II, who wrote that women have “the task of assuring the moral dimension of culture…a culture worthy of the person,” (Christifideles Laici, 51) and Pope Francis, who wrote of the need for  “a more incisive female presence in the Church,” (Evangelii Gaudium, 103), the Catholic Women’s Forum shapes the culture and serves the Church through its members’ expertise, an annual scholars’ symposium, media work, and periodic networking events. CWF also offers timely articles and resources through its website, newsletter and social media. To learn more, please visit catholicwomensforum.org. 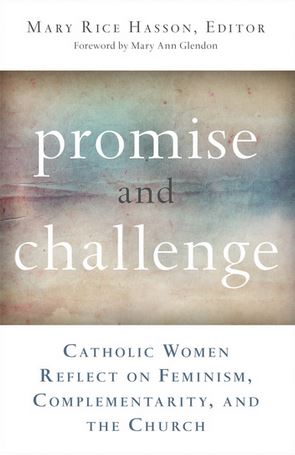 Promise and Challenge: Catholic Women Reflect on Feminism, Complementarity, and the Church Get Out Now: Why You Should Pull Your Child from Public School Before It’s Too Late What Catholic Women Think About Faith, Conscience and Contraception

[The Catholic Women's Forum, run by Mary Hasson] directly confronts a hostile culture, and with her characteristic grace and clarity, so many will be informed and inspired thanks to Mary's leadership.

Published in The Arlington Catholic Herald on May 18, 2021

Published in The American Conservative on February 9, 2021

Published in Our Sunday Visitor on January 29, 2021

Published in The Wall Street Journal on February 13, 2020

Why States Are Trying to End Hormones, Surgeries for Gender-Confused Children

Published in Our Sunday Visitor on January 31, 2020

Published in Washington Examiner on January 23, 2020

Votes, Quotas, and Titles: Missing the Point About Women

Addressing the Wounds of Abortion

Most Catholic Kids in Public School Leave the Church

Published in Legatus Magazine on May 1, 2019

Published in The Federalist on February 21, 2018

Published in The Federalist on December 1, 2017

Published in The Federalist on February 27, 2017

Published in OSV Newsweekly on February 1, 2017

Published in Washington Examiner on November 24, 2016

Published in The Federalist on November 15, 2016

Published in MercatorNet on June 9, 2016

Published in Letters from the Synod on October 15, 2015

Published in National Review Online on May 11, 2015

Commitment, Chastity, Mercy are the Building Blocks for a Happy Marriage

Published in Our Sunday Visitor on February 8, 2015

Published in Aleteia on November 5, 2014

The Culture Wars – Have We Lost?

Back to School: When Mr. Reuter Becomes ‘Ms. Reuter’

Published in The Federalist on August 5, 2014

Your Tuition Dollars at Work: How Colleges Promote a Perverse Sexual Ideology

Published in The Family in America

A Cultural Package That Sorts Winners from Losers

Youth Rights: A Trojan Horse for the Left’s Sexual Agenda

Published in The Federalist on February 13, 2014

Youth Rights and the Shrinking Power of Parents

Published in The Family in America, Fall 2013 Issue on

Published in The Federalist on November 12, 2013

Published in MercatorNet on October 21, 2013

The Boy Scouts Admit Gay Kids: Does It Matter?

Published in Catholic News Agency on May 6, 2013

Will ‘Transgender’ Rights Drive Catholics Out of Public Schools?

Pope Benedict XVI and the Call to Conscience

Published in Catholic Stand on February 11, 2013

The Catholic Church and the Girl Scouts: A Scandalous Mess

Published in Words from Cana on February 3, 2012

Lt. Nick Vogt and the Power of Faith