Published in Angelus on February 9, 2021

Abortion. In vitro and other forms of assisted reproduction. Euthanasia. End-of-life decisions. They are among the most sensitive social issues of our age, and public policies in these areas generate heated moral argument and debate. So why can’t our society agree about them?

According to EPPC Fellow O. Carter Snead, Notre Dame University law and politics professor and director of the de Nicola Center for Ethics and Culture, the reason is that we have lost any shared understanding of the meaning of human life.

“We have indeed forgotten who we are and what we owe to one another. We desperately need to remember,” he has written.

In it, Snead takes a deep look at the way our society looks at the human person and human life — what he terms “expressive individualism.” This philosophy, he argues, reduces human persons to the sum of their feelings and desires, forgetting that we are “living bodies” with deep personal histories, and that we belong to one another in families and communities.

In an interview with Angelus, Snead explains how this way of thinking leads to policies that diminish the most vulnerable and encourage divisions in society. He also calls for a new “anthropology” and better laws that would lead to greater compassion for the weak and greater respect for the sanctity and dignity of human life.

Angelus: Why write this book and why now?

Carter Snead: I’ve been involved in public bioethics for almost 20 years, including time as general counsel for President George W. Bush’s Council on Bioethics. I’ve always been struck by how frequently the law fails to protect the weakest and most vulnerable among us in the context of public bioethics.

Public bioethics began in scandals. Think of the Tuskegee scandal in which American researchers systematically deceived and exploited poor African American sharecroppers who were suffering from syphilis in Macon County, Alabama. Or of the research involving the intentional injection of Hepatitis into intellectually disabled children, chronicled by Henry Beecher in the New England Journal of Medicine. Or of the scandals involving research on newly born, just aborted, and imminently dying children in Scandinavia by American researchers.

So I started asking why it was that the law failed in this way, and what I came to was the view that our laws are rooted in a false and impoverished vision of what it means to be human and to flourish as a human being.

Laws dealing with abortion, assisted reproduction, end-of-life decision-making, euthanasia, and assisted suicide have a flattened, false vision of the person that excludes those who are not capable of high-level cognition, who cannot articulate their inner selves, and who cannot chart their own life’s course.

It’s an anthropological vision that Robert Bellah, Charles Taylor, and others have referred to as “expressive individualism,” in which a person is conceived of as a singular, atomized individual unit abstracted from any social context such as connections to family, community, or country.

Expressive individuals are thought to flourish by their self-discovery of interior truths. They must chart their path accordingly and everything else — relationships, the body, and nature — are instruments to be harnessed in pursuit of that goal.

Excluded from that vision are the elderly, the disabled, the poor, the marginalized, and children — including unborn and newborn.

In U.S. abortion jurisprudence the moral status of the developing human person is entirely determined by each individual pregnant woman. What are the dangers of building laws about the human person based on such a subjective approach?

In Roe v. Wade, Justice Harry Blackmun framed the question of abortion on the anthropology of expressive individualism, even though he didn’t acknowledge it. He described the context of abortion as a “clash of strangers,” in which the child in the womb was considered to be an invasive burden, a parasite, something subhuman and sub-personal.

So the unborn child’s moral status is an entirely subjective matter, to be determined by the woman carrying the child. It is a declaration that that child is sub-personal, has no rights under the Constitution, and may not have rights under state or federal law insofar as that conflicts with the interests and desires of the woman.

But a mother and her unborn child are not strangers. They are related to each other, both biologically and in a deeper relational way. If you were to understand the crisis of abortion through that lens, the conclusion is very different.

If we were to reframe abortion law as a unique crisis involving a mother and her child, we — the community and the government — would be summoned to their aid. By atomizing the mother and the child, Blackmun sets up an adversarial relationship of strife that can only be resolved through violence. That’s precisely what he gave us: the right to abortion.

You also explore the lack of laws that regulate artificial reproductive technologies (ART) and argue that this area of bioethics is also neglectful of the body and relationships.  What would a coherent legal approach to ART look like?

People can do almost whatever they want in the quest to create a biologically related child. I argue that laws should treat these practices in light of the parent-child relationship that they involve.

The relationship between parent and child has certain implications and creates unchosen obligations on the part of the parent to care for the child, a right which that child does not need to earn.

When we begin the process of conceiving a child and initiating a pregnancy and birth through ART, we’re not just talking about an individual that is undertaking a project. We’re talking about a person that wants to be a parent and who is a parent once they begin to participate in this process.

The best interest of that child is to be welcomed and unconditionally loved and cared for throughout his/her life. That means the law has to offer inducements, protections, deterrents, and other behavior-shaping devices to make sure that people act as they should vis-a-vis the well-being and the best interests of a child.

The way we practice IVF right now involves sex selection, multiple gestations, and all kinds of techniques that can modify the child’s body. It involves gestational surrogacy and the buying and selling of eggs or batches of living embryos. That’s not an endeavor that’s about being a parent and rightly taking care of children.

We have legal frameworks and policies that are designed to protect the well-being of children in American family law. And we have mechanisms to help support and shape the behavior of parents to ensure their children’s well-being.

That’s precisely the kind of norm that we should draw upon when thinking not only about ART, but about abortion, too: We should think about abortion as the proposed use of lethal force on behalf of a mother on an innocent child.

Many states are passing laws that allow people the freedom to choose the time, place, and manner of one’s death. How can we make the case for protecting life from “conception until natural death?”

Expressive individualism doesn’t take seriously what it means to be an “embodied being” — that we’re fragile corruptible bodies in time, that we’re mutually dependent upon one another, and that we’re subject to natural limits, including disease, age, and death.

Because we’re embodied beings, we have to have certain kinds of support systems in our lives. We need what the philosopher Alasdair MacIntyre calls “networks of uncalculated giving and graceful receiving” made up of people who are willing to make the good of others their own without seeking anything in return for it. The most obvious example of a network of “uncalculated giving” and “graceful receiving” is the family.

We all depend on these networks for survival, from our time as newborns, when we get sick, and as we’re nearing the end of our life. But we also depend on them to learn to care for others without expecting anything in return.

The law goes wrong when it fails to acknowledge this, especially when it comes to end-of-life decision-making. In places like California, which has legalized assisted suicide and promotes aggressive termination of life-sustaining measures for quality of life reasons, the law assumes that the highest good of the person who’s sick is to assert his/her unencumbered will.

And so proponents say, “Let’s give them the freedom to kill themselves, to author the last chapter of their book in a way that coheres with their life story.”

But anybody who’s familiar with the clinical context in which these issues arise knows that’s not reality. A person who’s having suicidal ideation is almost always a person who’s suffering from depression or from intractable suffering. And that’s not a zone where autonomy is operating at its height — that’s a zone where a person needs help.

If you come to their aid and treat someone’s depression or pain the right way, studies show that a lot of suicidal ideation goes away. 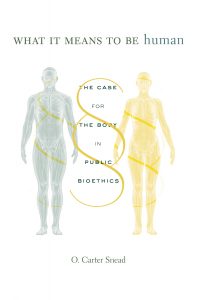 In California, there are just too many of those people — the elderly, the disabled, members of marginalized groups, minorities, and others — who already don’t have enough protection from inequalities and the health care system that we have.

These laws create a path of least resistance toward assisted suicide, especially for the marginalized. This is why the disability rights community largely opposes assisted suicide, and why Bishop Charles Blake and the Pentecostal African American community in California rose up against it.

When it comes to persuasion, it’s important for arguments to be sound, to be grounded in evidence and good reasoning. But even more than that, I always come back to Mother Teresa: you can’t really persuade someone without loving them first, and not in a cynical or strategic way.

People who disagree with us won’t hear us — and we won’t listen to them — if we don’t take that approach. Hopefully that will touch their hearts in a way that they will be open to listen.

But even if not, you still have to love them, not only because it’s the right thing to do, but because it’s the only way we’re going to actually have a conversation in which we hear one another and think about what is being said.

Carter Snead, a Fellow at the Ethics and Public Policy Center, is an internationally recognized expert in the field of law and bioethics.

Elise Italiano Ureneck is a communications and public relations professional who writes from Boston.