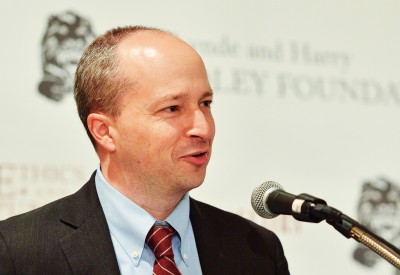 Yuval Levin: Good morning. Welcome to the 2014 Bradley Symposium. Thank you all for being here.  I’m Yuval Levin. I’m a Fellow at the Ethics and Public Policy Center and the editor of National Affairs magazine. EPPC and National Affairs are very pleased to be co-hosting the symposium, together with the Bradley Foundation this year.

For more than a decade now the symposium has accompanied each year’s Bradley Prizes ceremony, and it’s given us a chance to reflect on an important set of questions facing the country, to step back and consider some element of our public life with greater perspective and distance than the rush of events usually allows for. And that, of course, is exactly what we hope to do this year.

A few words of thanks– first of all, naturally to the Lynde and Harry Bradley Foundation, which supports so many important projects aimed at advancing American ideals and strengthening our country, and its institutions and traditions.

We’re very honored to have with us this morning some of the Foundation’s board members, as well as the Foundation’s staff members. Many thanks to all of you for everything that you do, and for helping this event come together. We’re particularly grateful to Dan Schmidt and to Terry Famer-Bradley for their guidance and wisdom in setting up this event.

I also want to recognize Bill Schambra and his colleagues at the Hudson Institute who have hosted the symposium over the past decade since it started. Bill is retiring, or more or less retiring this year, which we hope just means he’ll be writing more. But that’s why we at EPPC are taking over running the symposium. And as we do that, we do want to thank him and all the people who’ve worked with him over the years, to make these events so successful.

And finally, I want to thank Laura Mitchell of the Ethics and Public Policy Center and Sylvia Travaglione of EPPC who really did all the work to put this event together and did so brilliantly, as usually. Many thanks to all of you.

Our subject today flows naturally from the Bradley Foundation’s long-standing interest in strengthening and reinforcing the institutions of America’s free society, free economy, and liberal democracy. Bradley has always taken it upon itself to help America deal with its present problems and better prepare itself for its future challenges and opportunities. And in thinking about the right questions to take up in this year’s symposium, we all were struck by the degree to which the nature of those challenges and opportunities is so unclear just now the degree to which the present is a blur, even more than  usual, which makes the future even more of a mystery of an unknown country than it usually is to us.

There are a few reasons for this, I  think. First, for one thing the Obama years have been very disorienting for both the left and the  right. They followed the heels of a terrible financial crisis, they began with a terrible recession. The last five years have been spent more or less waiting for the roaring recovery that refuses to come. They continued with a series of dramatic political moments, all of which have tended to exacerbate the sense that our politics are intensely polarized and divided, that our government is increasingly overwhelmed– if not incompetent, that our economy is not what it used to be, that our country somehow is under stress and having trouble dealing with it.

The right and the left have both been stuck in defensive crouches in these years, each believing that it’s under assault and every moment has felt like a prelude to another crisis somehow.

Meanwhile, our country really is going through a series of transitions that leave the American public uncertain. We all live a sense that we’re somehow at the end of an era in American life, and it’s not clear what the next era will look like. The order of American life since the Second World War was dominated by large institutions, big government, big labor, big business, big media, big academic and cultural institutions and the path to success involved charting a path through these large institutions. That is how we lived in a time of unprecedented prosperity and success in American life, and we’re reluctant to see it go, but it does appear to be going.

Increasingly, American life is defined not by big consolidated institutions but by smaller, decentralized networks, less stable but more dynamic, and therefore by a vast array of options confronting all of us in every part of life, with the possible exception of government.  This massive decentralization of American life comes at the same time as the global economy has also been less and less dominated by the American economy, so that everywhere you look there’s more competition and less stability and security for us.

This new era in American life will offer us a lot of opportunities, if not also a lot of risks. But we haven’t yet learned how to recognize or handle either one, how to make sense of the present and prepare for the future. Instead, we’re still to a large extent mourning the passing order which cannot be kept.

And our politics, again, on both the left and the right, if in different ways, is overwhelmed today, maybe even suffocated by a kind of nostalgia. Liberals always think it’s 1965, conservatives always think it’s 1981, but it isn’t. And what Americans need is a better sense of how things look in 2014 and where they might be headed, for good and for bad.

That’s why we’ve gathered this panel this morning. To help us break through the fog and see some of the key trends and dynamics that increasingly define American life. To help us better grasp the present and think more clearly about the future, so that we can consider how the timeless principles of American life need to be applied to new circumstances.

And we couldn’t have asked for a better foursome to do that for us. So, I’ll tell you just a little bit about each of them, we’ll hear from each of them and then open things up for discussion, including your questions.

First we’ll be hearing about demographic and opinion trends from Karlyn Bowman. Karlyn is a Senior Fellow at the American Enterprise  Institute, where she wears a lot of hats, but is above all an analyst of demographics and public opinion. She’s served in the past as managing editor of Public Opinion magazine, editor of the American Enterprise and a contributing editor to AEI’s magazine, The American. And she’s written essays,papers, and books on an extraordinary variety of subjects in public opinion and in demography, from how we view Congress to how we think about healthcare, abortion, the economy, war and peace, death and taxes. She’s focused particularly in recent years on the evolution of American political and social life in response to key demographic and geographic changes in our society. She’s also the editor of AEI’s monthly political report, has been a columnist for Roll Call, and now has a regular column at Forbes.com.

After Karlyn we’ll hear about economic trends and dynamics from Glenn Hubbard. Glenn is the dean of the Columbia Business School and the Russell L. Carson Professor of Finance and Economics there. From 2001 through 2003 he was the chairman of the U.S. Council of Economic Advisors at the White House. He has served as an economic advisor to a variety of policymakers and government bodies and was the chief economic advisor to Mitt Romney’s presidential campaign in 2012. He’s the author of many dozens of scholarly articles in economics and finance, of three popular economics textbooks, co-author of books on foreign aid and healthcare reform and the federal budget and other subjects. And he’s written countless essays and articles on economic issues for general audiences, including writing for National Affairs. He’s one of the country’s foremost academic economists.

After economics we’ll hear about political dynamics from Henry Olsen, my colleague at the Ethics and Public Policy Center. Henry’s a Senior Fellow at EPPC where his work focuses on how to address the electoral challenges facing modern American servatism, work that will culminate in a forthcoming book entitled New Century, New Deal: How Conservatives Can Win Hearts, Minds and Elections. He has previously served as a Vice President at AEI and at the Manhattan Institute, President of the Commonwealth Foundation. His work has been very widely published and recognized. In recent years he’s been essentially celebrated as a scholar of the overlooked voter, working class voters who haven’t found a stable home in either party, and in a sense are the remaining winnable swing constituency in our politics and so are extremely important to the future of both parties.

Finally,we will hear about how the future might take shape, we’ll hear a little bit about who might live there, and about the characteristics and views of the rising millennial generation, from Kristen Soltis Anderson. Kristen is a pollster and a columnist for The Daily Beast. She’s done extensive research on public opinion, particularly in the youth vote. In 2013, she was the author of a report for the College Republicans called, “Grand Old Party for a Brand New Generation,” about how Republicans could win young voters. She’s been published widely, from academic journals to opinion journals to the op-ed pages. She’s writing a book on new ideas and social trends that matter to emerging voter groups, which is due out in 2015.

We’re enormously privileged and grateful to have these four as our guides this morning. So, we’ll hear from each of them in that order and then open things up for a conversation, both among them and between them and all of us.  So, why don’t we begin with Karlyn.