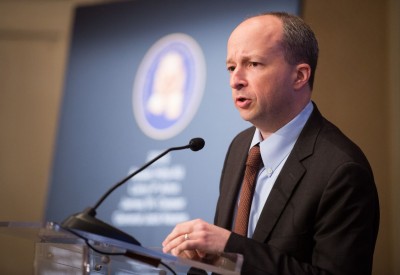 Yuval Levin:  Good morning everybody.  Thank you for coming.

Welcome to the 2015 Bradley Symposium.  We are very glad you could be here.  I’m Yuval Levin.  I’m a Fellow at the Ethics and Public Policy Center and the Editor of National Affairs Magazine.

EPPC and National Affairs are very pleased to be once again co-hosting the Bradley Symposium this year together with the Bradley Foundation.  For more than a decade now the Symposium has accompanied each year’s Bradley Prizes ceremony and has given us a chance to reflect on an important set of questions facing the country, to step back and consider some element of our public life with some more perspective and distance than the rush of events will usually allow for.  And that, of course, is exactly our goal this morning.

A few quick words of thanks before we get started.  First of all naturally to the Lynde and Harry Bradley Foundation which supports so many important projects aimed at advancing American ideals and strengthening our country and its traditions and its institutions.  We are very honored to have with us this morning some of the foundation’s board members as well as the foundation staff members and many thanks to all of you.  We are especially grateful to Dan Schmidt and to Terri Famer of Bradley for their guidance and their help in setting up this event and setting us off in the right direction.

Finally I want to thank Sylvia Travaglione and Emily Zydiak, Josh Britton and Julia Vaughn at EPPC and really everybody at EPPC who did the work to put this event together and did so brilliantly as usual.  Many thanks especially to Sylvia and to everyone who worked with her to make this possible.

Our subject today flows naturally from the Bradley Foundation’s long-standing interest in strengthening and reinforcing the institutions of America’s free society.  The institutions necessary for forming citizens, for building a thriving free economy, for providing opportunities to the most disadvantaged people in our country, for keeping America strong.

Is the purpose of the university the formation of a competent civilized elite or of a mass middle class society?  Is it skills training or moral formation?  Is it teaching or is it research?

These are older questions than we might be inclined to think.  And they are not necessarily uniquely American questions, of course.  John Henry Newman took up many of the same problems in a series of lectures in 1858 that he called “The Idea of the University” in the process of setting up a Catholic university in Ireland.  And to read those essays now is to see that not all that much is new under the sun.

Not much, but some things nonetheless, because the world has changed in our time in ways that puts some unique pressures on the university: economic pressures and cultural pressures, intellectual pressures.  They are pressures that increasingly compel us to answer yes to all of the questions I’ve just suggested and with more and more urgency.

Yes, the purpose of the university is to give people skills to find their place in an economy that demands more and more skills all the time.

Yes, its purpose is to make sure that American has the cream of the global crop of engineers and scientists and medical researchers.

Yes, its purpose is to secure upward mobility and a middle class life for as many people as possible in America.

Yes, its purpose is to combat cultural entropy and to deliver the gift of liberal learning to another generation.

To expect one set of institutions to do all of that is to expect a lot.  And given how much we expect of it, American higher education really does achieve a lot.  We could point to different corners of the American university world as success stories in each of these different areas.  And it is an extraordinary thing, and yet American higher education as a whole seems not to strike most people as a big success story right now.

It offers the promise of opportunity for millions but it is also in some respects a kind of bottle neck in the way of opportunity as costs rise faster than incomes and leave millions of young people with heavy debts just as they are trying to start out in life.

It is home to some shining examples of liberal education yet on the whole it seems to be suffocating liberal education for a variety of reasons and instead to be incubating political correctness or faddishness or close-mindedness that views the western tradition too often as a burden to be overcome or as a luxury that we can’t afford.

But change can be a good thing or a bad thing.  And understanding the difference requires some reflection and some thought on the situation of American higher education, on the possibilities for its future.

That is our goal today: to think about where higher education is headed in America and where it ought to be headed.  And we couldn’t have asked for a better panel of knowledgeable, thoughtful people to help us think about these questions together.

Our first speaker today, Mitch Daniels, needs no introduction and certainly in this kind of audience.  He is the President of Purdue University in Indiana, one of the country’s great universities, which he has run since 2013.  Before that of course he was the very successful Governor of Indiana.  He served as Director of the Office of Management and Budget at the White House, as a senior congressional staffer, as a think tank president, as a corporate executive and much else; lots of different kinds of perches that would give him an extraordinary perspective on the country’s strengths and challenges.  So he’ll have a lot to tell us about the future of the university in America.

Second we will hear from Andrew Kelly about the economics of higher education.  Andrew is a Resident Scholar and Director of the Center on Higher Education Reform at the American Enterprise Institute and is really one of the country’s premier scholars of higher ed policy.  His work has appeared in the American Journal of Education, Education Next, Education Policy — you get the idea — and also in a lot more general outlets, including in National Affairs.  He is also the editor of numerous books.  And Education Week in its Policy Notebook has named him one of the next generation of leaders in education policy.  Andrew has a Ph.D. in Political Science from Berkeley but we are going to really try not to hold that against him.

Third we will hear from Alex Tabarrok, the Bartley J. Madden Chair in economics at the Mercatus Center and Professor of Economics at George Mason University.  His published work has ranged from Studies in Law and Economics to Voting Theory to Health Economics and lots more.  He is the author and editor of a number of books including The Voluntary City, Entrepreneurial Economics as well as a superb introductory economic textbook series.  And he is one of the bloggers at one of the very popular Marginal Revolution Blog.  And together with his colleague there and at George Mason, Tyler Cowen, he is the co-founder of the online educational platform Marginal Revolution University.  So he is an actual practitioner in the online education world.  And he’ll tell us some of what he has learned in that experience and speak more generally about the role of technology in transforming American higher education.

Finally we will hear from Peter Lawler, the Dana Professor of Government at Berry College in Georgia and one of America’s leading scholars of political philosophy.  He is also Executive Editor of the quarterly General Perspectives on Political Science and has among other things been, this is my favorite part of his biography, been chair of the literature section of the American Political Science Association.  And we are going to try not to hold that against him.  He is the author of an extraordinary profusion of books including recently Allergic to Crazy: Politics, Education and Culture Rightly Understood, and his textbook American Political Rhetoric, now in its sixth edition, is widely used in college courses.  Peter is a practitioner and a champion of liberal education and we will hear from him about the state of liberal education and its prospects in America.

We are enormously privileged and grateful to have these four as our guides this morning.

So let’s just hear from each of them in that order.  And then we can open things up for a conversation both among them and among all of us and see what we learn.