On Feb. 24, 1845, a ship left Livorno, Italy, for England carrying a life-size white marble statue whose subject was a young woman, with manacled hands, captured by the Ottomans during the Greek War of Independence. This was the first leg of a journey that was to make the sculpture and its American artist, Hiram Powers, famous on both sides of the Atlantic. 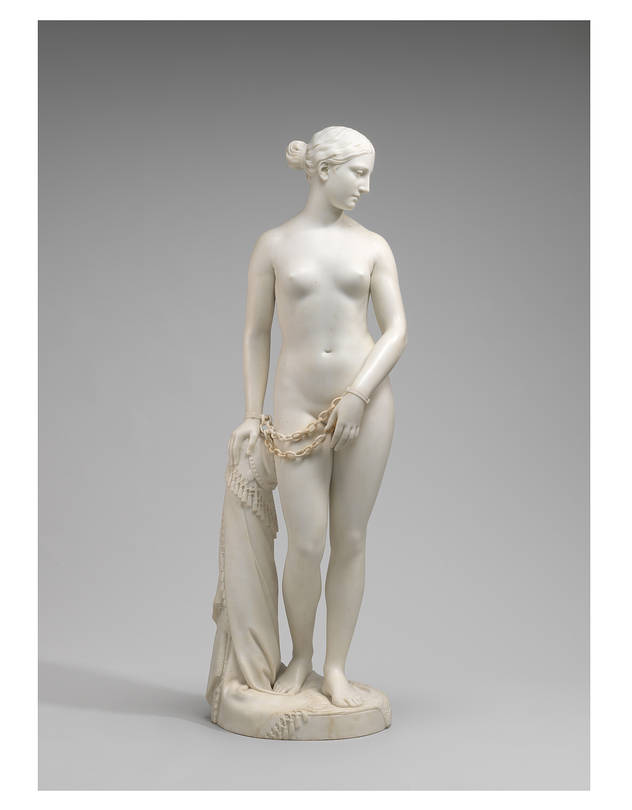 Within a day, “The Greek Slave” was on display at a tony Pall Mall address in London, where it met with astonishing popular and critical success. This was remarkable because her sensuality astonished Victorian visitors used to the chilly classicism of Antonio Canova and Bertel Thorvaldsen, the reigning sculptors of the first half of the 19th century. And never before had an American sculpture or sculptor been so lionized anywhere. “The Greek Slave” would prove to be a pivotal work in the history of American sculpture and taste.

How Powers rose to such fame (and subsequent fortune) is an amazing rags-to-riches saga. Born in 1805, he began his career working for a Cincinnati clock and organ maker before joining the Western Museum there. From Cincinnati, Powers moved to Washington, where he modeled busts of Presidents Andrew Jackson, Martin Van Buren and John Quincy Adams. In 1837, the sculptor left for Florence, to perfect his skills and attract well-heeled American and English patrons eager to buy white marble sculpture, then all the rage.

After the London triumph of “The Greek Slave,” Powers produced five replicas, each carved by assistants copying his full-size plaster model. (The original marble statue is now in Raby Castle, in England.) From 1847 to the late 1850s, two of these replicas toured the U.S. One, purchased in 1851 by the wealthy banker William Wilson Corcoran, is now in the collection of the National Gallery of Art, where it is currently on view. And through Feb. 19, 2017, the Smithsonian American Art Museum is showing “Measured Perfection: Hiram Powers’ ‘Greek Slave,’” an excellent exhibition exploring the creative process behind the work, whose centerpiece is the original, life-size plaster from which Powers carved the marble version.

Powers based “The Greek Slave” on the Medici Venus in the Uffizi Gallery, which he visited shortly after arriving in Florence. This Hellenistic marble was famous both for its ancient pedigree and for its erotic depiction of the lustful goddess. But Powers made important changes. While both figures are life-size and look to the viewer’s right, Venus covers her left breast with her right arm and her pudenda with her left. The chains and left hand of the Greek Slave also mask this lower area, but Powers has dropped her left arm, leaving her entire torso exposed. He has also made her body younger, slimmer and more sensual than that of Venus.

“The Greek Slave” is also a sculptural tour de force. Carved fully in the round, she reveals a multitude of different views from every angle.

Powers knew that the statue’s sensuality, and that she was not an ancient goddess but a contemporary Greek woman, would be controversial. He shrewdly claimed, therefore, that her pure Christian virtue (he placed a cross on her robes) allowed her to rise above her humiliation, thereby turning a somewhat risqué depiction into a supposedly religious one.

The first American exhibitions of the “The Greek Slave” attracted 100,000 visitors. Anticipating criticism of her nudity, Powers’s impresario, Miner Kilbourne Kellogg, published pamphlets to be sold at the venues containing laudatory essays, including one by the well-known Unitarian minister Orville Dewey giving the statue his imprimatur.

Nonetheless, numerous Americans were skittish about “The Greek Slave”—for many, the first female nude statue they had seen. Some exhibitions were always open to both men and women, while others had visiting hours reserved for men only. In Powers’s hometown of Cincinnati, the Presbyterian minister Lyman Beecher (Harriet Beecher Stowe’s father) declared the statue to be indecent.

On the verge of the Civil War, the figure’s bondage also generated controversy. Punch published a parody cartoon by John Tenniel (the illustrator of “Alice in Wonderland”) titled “The Virginian Slave, Intended as a Comparison to Power’s [sic] ‘Greek Slave’” when the marble was exhibited in the U.S. section of London’s Crystal Palace exhibition of 1851. The cartoon depicts a chained black slave leaning on an American flag and placed on a pedestal decorated with whips and chains. Fugitive slaves and British abolitionists confronted American visitors with the cartoon in the exhibition hall.

The exhibitions of the “The Greek Slave,” which captivated Americans while exposing their moral and political divisions, catapulted Powers to national and international renown. They also made him wealthy (the gate from the American tours alone was vast; one of Powers’s employees wrote that the cash “was in piles: gold, silver, paper”) and ensured a steady stream of patrons to his Florentine studio. Remarkably, over a century and a half after its creation, the fame of “The Greek Slave” remains virtually unequaled in the long history of American sculpture.

—Mr. Cole, a former chairman of the NEH, is a senior fellow at the Ethics and Public Policy Center. In his new book Love Your Enemies, Arthur C. Brooks beholds America’s 21st-century tribal feuds with a clear, intelligent eye and a hospitable attitude that is rightly focused on the spiritual dimensions of the problem.