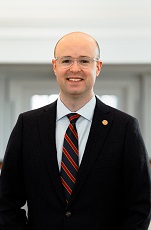 The Ethics and Public Policy Center is pleased to announce that noted evangelical scholar Andrew T. Walker has joined EPPC as a Fellow in EPPC’s Evangelicals in Civic Life program, where he will focus on the intersection of Christian ethics, public theology, and the moral principles that support civil society and sound government. Walker will remain an Associate Professor of Christian Ethics at the Southern Baptist Theological Seminary, where he is an Associate Dean and serves as the Executive Director of the Carl F. H. Henry Institute for Evangelical Engagement. His academic research interests and areas of expertise include natural law, human dignity, family stability, social conservatism, and church-state studies. Read his EPPC bio here.

“Andrew Walker is one of the brightest lights amongst the next generation in the evangelical church. I could not be happier about bringing him to EPPC so that he can further his work in the nation’s capital. This is a win for everyone,” said Ryan T. Anderson, who became EPPC’s president on February 1, 2021.

“The Ethics and Public Policy Center is one of the most influential think tanks in America and I’m honored to join such a storied organization,” said Andrew T. Walker. “I am thankful to my dear friend Ryan Anderson for the invitation and look forward to joining him in championing the first principles necessary for a just social order.”

“The appointment of Andrew Walker to the Ethics and Public Policy Center is a wonderful development and signals that the future of the evangelical witness in America will remain strong. Andrew is a leading voice in his generation, and he will serve evangelicals well in this role with both the tenacity of mind and graciousness of spirit.” – Daniel Akin, President, Southeastern Baptist Theological Seminary

“Andrew Walker is one of the most promising evangelical public intellectuals of his generation. His addition to the EPPC team strengthens the think tank for the most difficult and challenging era yet for social and religious conservatism.” – Rod Dreher, author, Live Not by Lies

“The Ethics and Public Policy Center has again hit the bull’s eye, drawing to its ranks Andrew Walker, one of our nation’s leading young evangelical thinkers. Dr. Walker is in the forefront of reviving the tradition of natural law theory among American Protestant intellectuals. He joins EPPC’s outstanding Catholic and Jewish thinkers in a truly ecumenical and interfaith alliance of scholars devoted to the harmony—indeed unity—of faith and reason as the ‘two wings on which the human spirit ascends to contemplation of the truth.’” – Robert P. George, McCormick Professor of Jurisprudence and Director of the James Madison Program in American Ideals and Institutions, Princeton University

“Andrew Walker is among my most trusted counselors for engaging our culture in a faithful, gracious way. His keen insight is matched with a pastoral grace and a missionary instinct. It is the duty of Christian intellectuals to translate the faith transmitted once for all to the saints into the language of the culture, and Andrew Walker leads the way in doing that.” – J. D. Greear, President of the Southern Baptist Convention

“Andrew combines a sharp focus on the cultural issues conservatives face with a steady temperament that is both bold and kind. His theological faithfulness and academic heft will serve the Ethics and Public Policy Center as few evangelical scholars can.” – Katie McCoy, Assistant Professor of Theology in Women’s Studies, Southwestern Baptist Theological Seminary

“Andrew Walker represents the kind of thinker that Protestant Christianity needs: thoughtful, gracious, and engaging; charitable when he can be, forthright when he needs to be. More specifically, he is an important voice in the growing number of Protestants interested in natural law. His addition to EPPC is good news for the think tank in particular and excellent news for the Christian constituency in general.” – Carl R. Trueman, Grove City College