Published in Wall Street Journal on May 6, 2017

King Charles I of England had deep pockets and a discerning eye, allowing him to assemble an art collection that included masterpieces by Raphael, Mantegna, Correggio and Caravaggio. In 1626, his agents in Italy acquired a portrait of the Venetian Doge Andrea Gritti (1546/48). Its creator was Titian, an artist whose works Giorgio Vasari, the taste-making biographer of the Renaissance, called “worthy of infinite praise, which will last as long as illustrious men are remembered.” 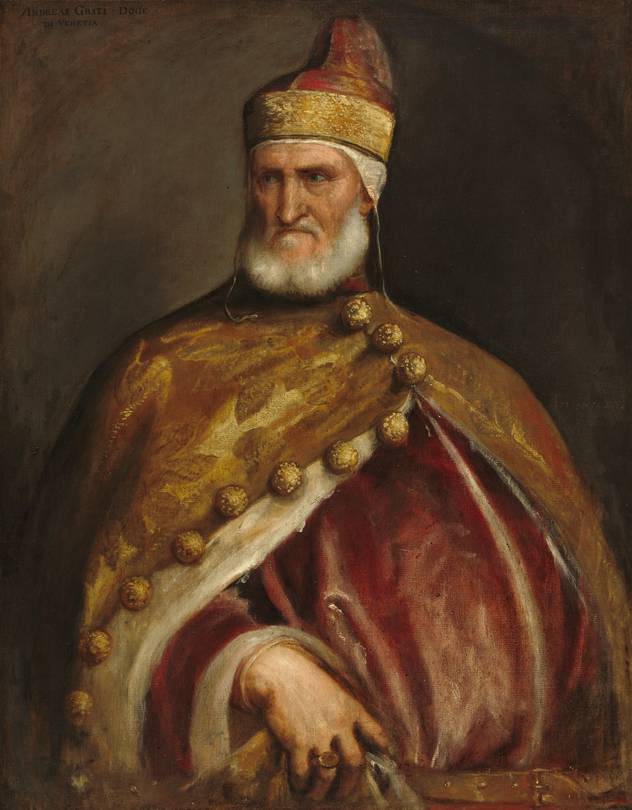 The painting, an important example of Titian’s famous “late style,” powerfully depicts a haughty, self-confident leader—doges were the chief magistrates and rulers of the republic of Venice. Gritti is imposingly garbed in his official costume of golden robes and corno ducale (peaked velvet crown).

One of the first celebrity artists, Tiziano Vecellio (c.1488-1576), better known as Titian, was pursued by kings and emperors for likenesses that endowed them with a grace, command and natural nobility that, in reality, many of them lacked—though not Gritti. So it’s no surprise that an imperious portrait of an important ruler by the premier painter of the Venetian Renaissance appealed to a monarch who insisted on the divine right of kings.

After Charles’s execution in 1649 the painting was sold, passing through various owners until it entered Washington’s National Gallery in 1961.

Titian’s path to the Gritti portrait led first through the art-rich court of Mantua. There, in 1536, Federico Gonzaga, duke of Mantua, commissioned him to paint portraits (now destroyed, but known through engravings) of Julius Caesar and the first 10 Roman emperors. Inspired by Suetonius’ dramatic, often scandalous and gossipy “Lives of the Twelve Caesars” (A.D. 121), the Caesars are, like the Doge, seen in three-quarter length. Each was painted with an energy, gesture and insight that creates a new feeling of character and mood, presaging a change from Titian’s earlier, more static portraits to a bolder, more dynamic and monumental portrayal, seen in his likeness of Gritti.

A significant figure of the Serenissima, Gritti (1455-1538) was a businessman, military leader, spy and diplomat. A longtime resident of Istanbul (where he fathered four sons out of wedlock), he used his position as a grain merchant to spy on Venice’s enemies, the Turks. Imprisoned for espionage in 1499, he was freed in 1502 after the Venetians paid to obtain his release. He then returned to Venice, where in 1523 he was elected the 77th doge, ruling for 15 years.

Admired for his diplomatic and military skills, Gritti cut a large figure in Venetian society. A contemporary commented on his “authority” and “majesty.” Another said that he had “every good quality,” was “handsome, generous, well spoken,” and “his worth is more pleasing because it appears in a handsome body.” But if he “had reason to be angry with someone, he assumed a severe and terrible aspect.”

Titian paints Gritti in one such stormy mood. He gathers his robes, begins to turn his mountainous, nearly life-size body (it’s already moved beyond the frame) to exit rightward. But his scowling face swivels in the opposite direction, as though something, or someone, has suddenly seized his attention. This arrested twist animates the picture, giving it a psychological and physical spark. Here, as in Titian’s other great portraits, we glimpse a sentient living, breathing presence, dramatically different from so many of the traditional icon-like pictures of earlier doges.

The Gritti portrait is in almost the same condition as the day it left the artist’s studio, making it a benchmark for understanding Titian’s working methods. Unlike other works by him, the painting has escaped relining, a process in which a layer of canvas is glued and then pressed onto the back of a damaged canvas to preserve its surface. This often destroys the topography of the pigment, making the paint surface flat.

Not here. The gold cape, its huge buttons, Gritti’s silky beard, the large, grasping hand (perhaps derived from Michelangelo’s “Moses”) and the corno ducale are created with a brush that flicks and darts rapidly across the surface, sometimes loaded with pigment (errant drops of paint still dot the surface) and sometimes nearly dry, allowing the fine weave of the canvas to become part of the image. Some passages are painted so loosely that they look almost impressionistic. As in late works by Rembrandt (an artist who owed much to Titian), objects such as the cape’s fur hem, or its brocade, take shape as much in the imagination as in the eye.

Surprisingly, the Gritti portrait is almost certainly posthumous. The style and technique do not appear in Titian’s work until the mid-1540s, or about seven years after doge’s death. X-rays of the canvas reveal that, except for changing the direction of the eyes (they originally looked straight ahead), adjusting the height of a shoulder, and enlarging the buttons, the artist, uncharacteristically, made very few modifications as he painted, strongly suggesting that he relied on an earlier painting or drawing, perhaps by his own hand, to create the likeness.

If true, Titian’s vivifying brush summons Gritti back to life in an astonishing act of resurrection in paint and canvas.

—Mr. Cole, a former chairman of the National Endowment for the Humanities, is a senior scholar at the Ethics and Public Policy Center.