The Faith Angle Forum is a semi-annual conference which brings together a select group of 20 nationally respected journalists with 3-5 distinguished scholars on areas of religion, politics & public life.

Speaker: Sergio Rubin, Journalist and Co-author with Francesca Ambrogetti, Pope Francis: Conversations with Jorge Bergoglio: His Life in His Own Words

A video of Mr. Rubin’s presentation is available here. 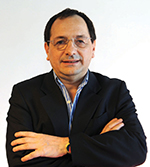 SERGIO RUBIN: It is an enormous honor for me to participate in this important seminar in which such notable religious personages and distinguished scholars have provided an illuminating analysis of Pope Francis’ papacy. As a journalist reporting on religion in secular media in Argentina for more than 30 years—and it is in this capacity that I am speaking here—I would first like to confess that unlike the 2005 conclave, when I thought that Jorge Bergoglio was likely to be elected Pope, last year I did not believe he would be, despite the fact that a few days before his election I reported in the newspaper and on television that, according to Vatican sources, he was once again in the running. I thought his time had passed. However, I believed that the Church—beset as it was by a multitude of problems—should act boldly and choose an unlikely candidate who could pluck it out of the eye of the storm and revitalize its religious action. That is why my first reaction to the news that he had been chosen as Saint Peter’s successor was profound surprise. This was followed by a feeling of intense joy, and ultimately, great fear, due to the tremendous challenges that awaited him.

It is not the purpose of this speech to delve into an analysis of how Jorge Bergoglio came to be Pope Francis. I would merely like to draw attention to the Cardinals’ audacity in embracing something new: the first Pope from the New World, the first Pope from the periphery—from the “ends of the earth,” he would call it—the first Jesuit pope. And the fact that this meant a shift in vision—more pastoral—and in approach—more open—along with the marked social focus of the occupant of the throne of Saint Peter. In this sense, this succession has certain points in common with the succession of Pius XII and the auspicious arrival of John XXIII. This confirms my belief in the Church’s capacity to “reinvent” itself, beyond the action of the Holy Spirit on the eyes of faith. Those of us who have followed Jorge Bergoglio’s activities and ways of thinking were familiar with these characteristics on the part of the former Archbishop of Buenos Aires. In my case, and that of my dear colleague and friend Francesca Ambrogetti, we have followed him particularly closely because of our book, The Jesuit, which we wrote based on two years of conversation with Cardinal Bergoglio, and published in 2010.

Based on the career of Father and Bishop Bergoglio, and an analysis of the first nearly full year of his tenure as pope, in which his gestures and words have been greeted by so much enthusiasm, it is worthwhile to consider the question of whether he is a revitalizing, reformist, or revolutionary pope. Again, my approach to these questions is that of a journalist covering religious issues who must act as a bridge between the news and a diverse audience. Someone who must have the proper training, but must communicate as clearly and directly as possible. Communicating about religion is especially challenging, because religions invoke a transcendent dimension. This necessarily renders us susceptible to accusations of “reductionism” or to interpretations in a purely political key. Moreover, from a media perspective, it is not just about whatever a representative of the Church or institution wishes to communicate via actions and ideas, but also what the audience processes and decodes. Therefore, it is not just important to understand who Francis really is, but also how we present him and what the public perception of him is.

Is he a renewer? If what we mean by renewal is having renewed the enthusiasm of the faithful, there can be no doubt. All over the world people are talking about a significant number of Catholics coming back to the faith, even going to mass. Here in the United States I have heard the thrilling stories of people formerly disenchanted with the Church, not to mention what is happening in Italy, or my country, Argentina. His bearing witness to austerity, to closeness to all, especially the poorest, his understanding words—some of his most noteworthy being the question he asked journalists on the return flight to Rome following his tour of Brazil: who am I to judge a gay person…?—which had such a profound impact that they require no further comment. And their effect may have been more pedagogical than encyclical. His desire for greater transparency in the Church and greater humility on the part of the clergy was also warmly welcomed. In a world chock-full of words and a Church prolifically producing documents that few actually read, his witnessing to a media-influenced society has made him a great communicator. Even his magnificent smile has a unique power to communicate the joy of the Gospel. As Time Magazine put it, “He has not changed the words—in that he has not changed any rules—but he’s changed the music.” And people liked that. So, there can be little doubt that he is a renewer.

Is he a reformist? Thus far, as we have said, no rules have been changed. But we feel there are signs that some changes will be made during his papacy. Or at least, a debate will be started. The example that is closest at hand is the matter of denying communion to the faithful who are divorced and remarried. It is true that Benedict XVI never closed the door on revisiting this very controversial issue. But Francis seems ready to address it. The upcoming synod on the family will be a big test. Moreover, the extensive questionnaire on family life that he sent to bishops’ conferences around the world would seem to indicate that we are on the verge of a broader, more realistic debate within the Church on these questions. The changes planned in the Roman Curia, the end of “careerism” in the clergy and the curtailment of honorific titles, the push toward greater collegiality, the new administrative structures that are being considered, the future role of women in the leadership of the institution, etc. are all evidence that a series of changes are in progress. How far Francis will go, or rather, how far he will be able to go, only time will tell. But I have no doubt that he has the desire to make change, but with caution and without acting in haste. His priority is to renew the proclamation of the Gospel. Unquestionably, he is also a reformist.

Is he a revolutionary? I must acknowledge that the question almost seems out of line. However, I believe he is in the sense that he is driving a sort of cultural revolution within the Church. Because, in my opinion, after centuries in which the institution appeared to focus on sin and damnation, or at least that was how it appeared to much of society, Francis is once again placing love at the center and prioritizing it above all. It is not that, as has mistakenly been reported, he wishes to abolish the concept of sin, but rather remind us that the redemptive power of love is stronger than all human frailties. And placing love above all does not just mean being understanding and forgiving, but demonstrating that to our neighbor. It means not obsessing over matters of sexuality, not focusing solely on protecting human life at its inception, but throughout the entire process until natural death. It means making a serious commitment to social justice and peace. It means engaging in dialogue and putting ourselves in another’s shoes. It means respecting everyone’s freedom, without ceasing to proclaim the Christian message. It means proclaiming the Gospel with joy, living a happy life here in the knowledge that eternal life also awaits. After all, the Christian message—when taken seriously—is lovingly and peacefully revolutionary.

Having reached this point, it is now time to ask ourselves whether Catholics, the clergy and the faithful, will also be renewers, reformers, and revolutionaries, like Francis. Will they merely cheer him on, or will they actually follow him? The new Pope’s first inspiration was to take the name of the great saint of the poor. All part of the plan. Let us not forget that Saint Francis of Assisi was himself a revitalizer, a reformist, and a revolutionary.

Pope Francis decided to reclaim lost ground on the world stage as a builder of world peace and the fight against injustice previously conquered by John Paul II and abandoned, to a certain extent, by his predecessor, Benedict XVI, who was more concerned with religious questions.

Jorge Bergoglio not only placed more emphasis on the fight against poverty, the call for capitalism with a human face, and problems such as immigration, he also backed up his words with actions such as his trip to Lampedusa to meet with African immigrants.

With regard to peace, his intervention in the Syrian civil war with the letter he sent to Russian president Vladimir Putin just before the G-8 summit, and leading the world day of prayer for peace in the Middle East, both sent a strong message.

In the eyes of many observers, those two gestures were key to preventing a potential attack on Syria from the outside—in an attempt to corner the dictator, Al Assad—and gain leverage for negotiations. And they caused him to be nominated for the Nobel Peace Prize.

U.S. President Barack Obama’s imminent visit to the Vatican is an acknowledgment of Francis’ role as a world leader. My hypothesis is that Obama wishes to build an alliance with the Pope in the war on poverty.

The U.S. President, conscious of Francis’ good relationships with the Jewish and Islamic communities and their leadership, also seeks to build an alliance for peace in the Middle East.

I believe that just as Pope John Paul II and Ronald Reagan joined forces—each from his own standpoint—to bring an end to communism in Eastern Europe, the new Washington-Vatican alliance will be to bring peace to the Middle East.

But Obama will have to make some concessions to the pope, especially with regard to his health plan that imposes requirements on hospitals that conflict with Christian bioethical principles.