Published in The Federalist on November 15, 2016 It started a week before the election. Daily Beast Senior Editor Erin Gloria Ryan, playing the feminist Cassandra, warned that “if Hillary Clinton loses” and if Republicans retained control of Congress, then “the repeal of Obamacare is all but inevitable” and “the free IUD benefit vanishes.”

As the clock ticked down on this high-stakes campaign, Ryan’s call to action was yet another reminder of the Left’s obsession with fear-based pelvic politics. Ryan implored feminists to vote (early, if possible), then immediately “run—not walk— to their local gynecologist’s office and get an IUD…this is urgent!” You see, what matters most to feminist progressives is the need, in Ryan’s memorable words, to help women keep their “uteruses as vacant as Antonin Scalia’s Supreme Court seat.” (Um, might be time to rethink that analogy.)

Perhaps overconfident in Hillary’s election and the continued supply of taxpayer-sponsored birth control, few (if any) progressive women actually ran, or even walked, to their gynecologists’ offices for IUDs before the election. So as the Donald Trump-Mike Pence “electoral catastrophe” unfolded on election eve, Ryan shouted louder (via tweet):

When the proverbial “morning after” dawned, feminists’ manufactured panic attack was full-blown. “Getting an IUD” was trending on Twitter. By 8:30 a.m. on November 9, New York magazine headlined the impending crisis: “Here’s Why Everyone Is Saying to Get An IUD Today.” 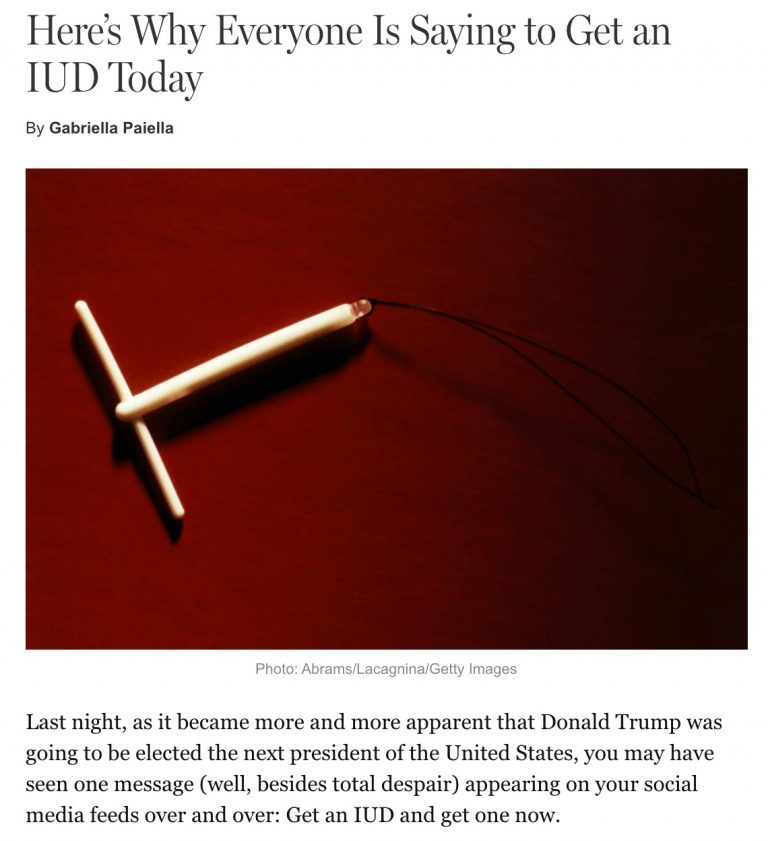 NPR somberly intoned that women are “concerned that the Trump administration might end Obamacare provisions that require insurers to cover intrauterine devices and other contraception and cut funding for abortion [providers, e.g. Planned Parenthood] and reproductive health overall. So women are looking for long-term solutions like IUDs: ones that will outlast a presidency.”

Other progressive voices piled on, “Get your IUD…birth control that will outlast Trump” and “Get your IUDs while you can, because in Trump’s America you may not be able to.” 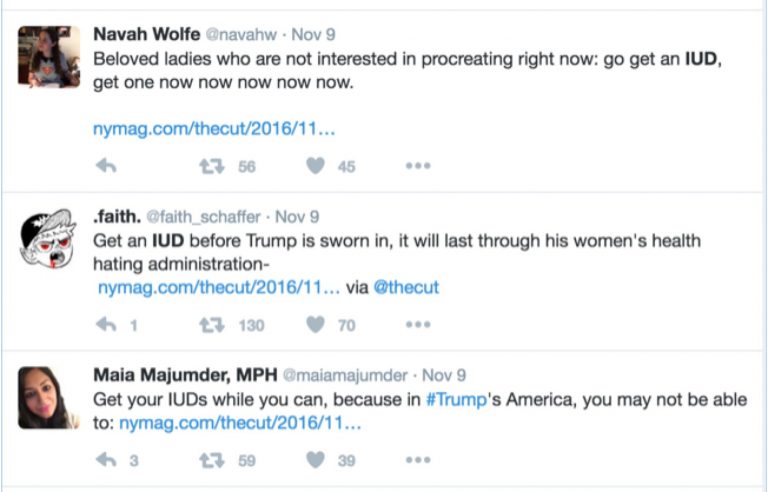 In politically correct style, the feminist-generated fear was “trans-inclusive,” that is, “people with a uterus” and “people with vaginas” should panic, too: “Get an IUD today.”

The media narrative framed the IUD panic as a spontaneous cry of alarm arising from ordinary women. But of course it wasn’t. Progressive women’s magazines and the liberal media pushed the panic button in a highly coordinated fashion: 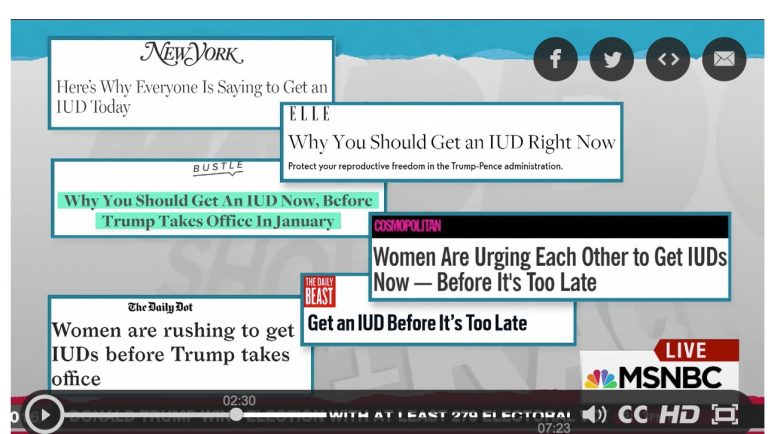 Feminist lobbyists helped whip up the frenzy too. Sarah Christopherson of the National Women’s Health Network told a Broadly reporter two days after the election that women should be “very, very worried,” not only because Obama is out and Trump is in, but also because of Republican majorities in Congress: “[W]ith no one to stop them, there’s every reason to believe that not only will the ACA be at risk for repeal but that all of the other ways that women have been able to access affordable reproductive care, through Title X, through going to Planned Parenthood” are in jeopardy too.

The New York Times Gets Passive-Aggressive

Three days after the swirling panic began, the Old Gray Lady stepped up, first to validate and then to calm the waves of concern. The threat and resulting fear appeared serious, according to the New York Times. After all, Andrea Miller of the National Institute for Reproductive Health reported, “My phone was ringing off the hook.”

Plus, the NYT reporter noted, Miller’s organization “heard from some anxious women, concerned that their birth control options might become quickly and severely limited.” (How many women does it take to equal “some women,” I wonder. Two? Three?) NPR took a similarly nuanced stance on the scope of the outcry: “Women across the country are rushing to get IUDs. Or at least, they’re tweeting about rushing to get long-term birth control, according to a surge of messages on social media” (emphasis added).

Reflecting their recent commitment to “honestly” reporting the news, the Timesreassured readers, “No, birth control coverage won’t go away.” The article admitted, in fact, that “contraceptive access is likely to remain broad,” even if Republicans make changes. It cited a 2015 Kaiser Family Foundation brief which concluded that, pre-Obamacare, “coverage for prescription contraceptives was generally widespread in the private and public sectors.” (You mean Sandra Fluke was dramatizing? Shock.)

The Times’ final, soothing message: “Any changes would take months — or, more likely years — to take effect…women don’t need to rush out and get [an IUD] right away for fear that birth control will be outlawed any time soon.”

Nice passive-aggressive move there. On the one hand, the paper admits that the pre-Obamacare reality was pretty good for birth control users and no drastic changes seem imminent. On the other hand, the Times raises feminists’ worst case scenario—that birth control will be outlawed—and slyly offers the weak reassurance that it won’t happen “any time soon.”

Cue up the Daily Kos, which frothed that a Trump presidency and “a right-wing Supreme Court…could erode birth control rights, and possibly even ban birth control,” so the IUD is a woman’s “only hope” for avoiding the “disaster” of an unplanned pregnancy. Translation: Women of America, you and your birth control are never reallysafe from misogynist Republicans. The one thing necessary for women’s freedom, equality, and happiness—birth control, with abortion as a backup—is always precarious.

We’ll Solve This Problem We Made Up!

Fortunately—and this is the point of the manipulative birth control scare tactics—the feminist-reproductive rights establishment swung into action, proving their value by promising to safeguard free birth control for all “people with uteruses.” Of course, donations are urgently needed. Planned Parenthood tweeted to the world its commitment to keep women sexy and free— “These doors stay open!” —and launched a perfectly timed fundraising campaign on the backs of the birth control panic. 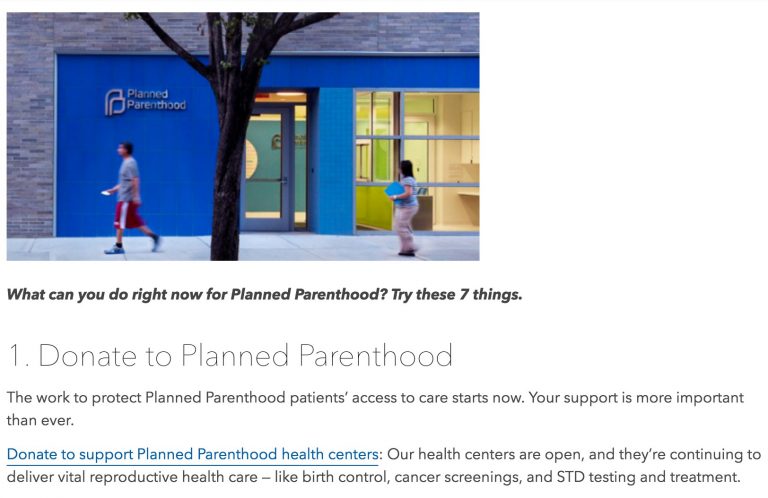 So what are we to make of this orchestrated hysteria? What does manipulative, fear-based, pelvic politicking really say about today’s feminists?

First, let’s recognize that radical feminists treat women with incredible condescension, as if we’re all silly, self-absorbed people who can’t think past the next romp in bed. Listening to the feminists’ post-election caterwauling over the mere prospect of paying for their own birth control, you’d never know that voters’ top issues in this past election were the economy and jobs, national security and terrorism, health care (distinct from abortion issues), and immigration.

Real women actually care about those issues. A lot. But radical feminists have nothing to add to those substantive conversations. Instead, they manufacture outrage over pretend problems in a bid to stay relevant, all the while reducing women’s concerns to the tenets of feminist ideology. It reflects feminists’ long-standing disdain for American women.

Second, while radical feminists are irrelevant to serious conversations about policy and ideas, they are smart enough to recognize the cash value of the “reproductive justice” agenda. They also have no scruples about exploiting women to advance their own financially rewarding priorities. It’s no coincidence that all vectors in the faux panic over birth control access pointed to the IUD as women’s salvation. It would take a much longer article to do this point justice, but suffice it to say that radical feminist groups and the repro rights community benefit substantially by promoting the IUD.

In brief: After 50 years of pushing the birth control pill as the key to women’s equality, freedom, and happiness, feminists have run into a stubborn problem: women don’t like the pill’s side effects. As noted in medical journal The Lancet, “the discontinuance rate in the first year of use is 50%,” and the failure rate (of those who continue it) is 9 percent in actual use, because women occasionally skip or delay their daily pill.

The proponents of “vacant uteruses” (that is, not occupied by babies) are hell-bent on fixing this problem, and the IUD does the trick. Why? Two reasons: IUDs rarely fail (less than 1 percent) and women cannot “discontinue” using an IUD on their own (at least not without risk, although some women become desperate enough to attempt self-removal).

A woman who wants the IUD out now learns it’s not that easy: she needs an appointment, a trip to the doctor, and a conversation with her doctor to convince him or her that no, she doesn’t want more counseling to help her persevere through the side effects, she just wants the IUD out. Most American women reject the IUD as a method of birth control (although IUD use has increased, it remains low: just 5 to 11 percent of women, depending on age, choose an IUD). This low uptake greatly frustrates the reproductive rights establishment—and it affects their bottom line.

IUDs are expensive, which is one reason the ACA’s “free” birth control matters so much to radical feminists. The government now foots the bill for the IUD and the cost of inserting it, generating substantial business for IUD pharmaceutical companies, medical providers (including Planned Parenthood) who insert them, and the advocates who heavily promote it.

The medical community and pharmaceutical companies push the IUD as a “first-line” (preferred) contraceptive method, even for young teens, post-partum, and post-abortive women, and they advocate using tiered or directive contraceptive counseling to guide young women to choose “the most effective methods” (IUDs). Even so, most women still don’t choose IUDs—they are rightly wary of side effects like pain (cited by 68 percent of women as the reason they had the IUD removed early), abnormal bleeding, and cramps, as well as the risks of uterine perforation or ectopic pregnancy.

IUD promotion campaigns are part of reproductive activists’ larger line-your-pockets strategy. They represent a “win” for those ideologues who see pregnancy (and babies) as the ultimate setbacks to women’s progress.

Finally, this latest birth control panic stands as a reminder that the feminist narrative is a work of fiction, and poor fiction at that. Their storyline never varies: women’s equality is balanced precariously on abortion rights and free birth control, and all women want equality, as defined by the feminist narrative. Ryan summarizes the feminist platform as “the right to choose,” to “confidently pursue equal pay,” to “enjoy respect in fields that were traditionally male,” to “opt to live independently without being labeled spinsters,” to “express our sexuality freely,” and to be able to go to work or parties without being “groped.”

The truth is that women are incredibly diverse. We’re also 50 years past the radical feminist heyday. A modern agenda must reflect women’s real priorities, which vary greatly according to their values and circumstances. “Women’s issues” can’t be shoehorned into the narrow categories championed by out-of-touch feminists.

But don’t expect feminists to recognize this. Daily Beast editor Ryan laments that “young feminists must wrestle” with “a darker possibility… as they consider what just happened: Maybe we don’t live in the country we were so confident we did. It’s time to face the truth beyond our customizable virtual worlds, beyond our gentrified city blocks—it’s worse out there than we thought.” I hope she’s right.