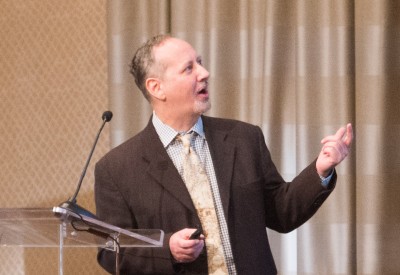 Alex Tabarrok:  Thank you all for inviting me.  I’m also going to put a PowerPoint up.  But I actually like PowerPoint.  So we’ll see how that goes. Mostly what I want to talk about is creative destruction in education brought about by new online technologies.

So I’m particularly going to focus on the creative aspect; how these new online technologies can allow us to teach more people at lower cost in a better way than ever before.

I’ll say a little bit about destruction.  Maybe we can talk more about that in the Q & A.  And then I’ll have a few words on the importance of the opportunities in particular for this audience.

So the biggest advantage of the online technology is I think the one that you all understand and that is scale.  So you can teach 100,000 people online at pretty much the same cost as you can teach 100 people or ten people.  These technologies scale tremendously.  This is the massive in MOOC. And you’ve all heard this so I am not going to belabor the point but keep the point in mind.

In addition to scale, however, these technologies also allow us to teach in a better way and in a way which saves time.  Now —

— unfortunately I’m a little too familiar as most teachers are with pictures like this.  And one of the reasons for this — you know when I’m teaching my students at George Mason University and I see 20% of them they are not following, 20% of them they have that look on their face, they are just not getting it.  Well, it is very natural in that case for me to repeat myself.  But that means that 80% of the students are hearing something twice which they only needed to hear once.

So let me show you this piece of technology, this is ancient technology.  Many of you may not recognize this.  This of course is a TV Guide.  It tells you that in 1963 if you wanted to watch Hootenanny you had to be in front of your television set on a Saturday night between 7:30 and 8:30.  If you weren’t there you didn’t see the show.  You missed it.  You couldn’t record it.  While you were watching the show you couldn’t pause it and go get a beer.  You couldn’t watch it ten minutes now and ten minutes later.  You were told when and where you had to be in order to watch the show.

Now you are thinking this is ancient.  This is ancient technology.  We won’t do anything like this today.  But take a look at this.  This tells you if you want education and particularly if you want Barbara Don’s accounting class you’ve got to be Wednesday somewhere in a particular place between 8:15 and 9:40 a.m.  Why?  Why?  I can get entertainment on demand.  I can watch Captain America: Winter Soldier when and where I want it pretty much anywhere in the world with my iPad.  Why can’t I get education on demand?  Why are we restricted to forcing people in particular times and particular places in a particular way?  And why do we have these 50 minute classes or two hours and 45 minute classes?  Is that optimized for the human attention span?  Of course not.  We only do that because if you are going to require all the students and the teachers to collect in the same place at the same time you better squeeze as much education into them as you can in order to bear all those fixed costs of having to get to the university and so forth.

Moreover the online model was 36% to 57% less costly to run on an ongoing basis.  Now if you think about those two things, about the same output with maybe 1/3 to 1/2 the inputs, okay, what that means is that the productivity of the online model is 56% to 133% higher than the traditional model.

Now everyone in education is concerned about the costs from the President on down to the parents.  And online models are the only plausible way to seriously reduce costs.  That is why I think these models are only going to grow.

Moreover, these costs which I’ve mentioned, these are the monetary costs.  These are the costs of the university.  If you actually look at the total costs, they are even lower because the hybrid format, the online students actually spent less time with the material for some of the reasons I mentioned earlier, they got at least as good results, test results but they spent less time so it was less costly to the students; big time savings for the students.  And the students, they didn’t have to drive to the university and find parking, which is impossible anywhere you go.  So there were huge cost savings to the students as well as to universities.

Now we’ve heard a lot about the MOOC, the massive and I think that is actually a little bit misleading, the idea of mass, this is a mass education model.  It is actually as we move forward a much more individualized personalized model.

You know the ideal education form is probably the Oxford Tutorial System; each system has a tutor particularly assigned to them.  Now that model has long gone away.  It has long went away because it is just too costly.

You know when students make mistakes, when they make mistakes on exams; these mistakes are typically not random.  The pattern of mistakes which a student makes tells an experienced teacher something about what the student didn’t quite get, what are they missing.  We can, using artificial intelligence, pull that pattern out in a much better way than ever before using data from hundreds of thousands of students.  So an AI tutor can look at the patterns of mistakes, look at what the student knows and what the student doesn’t know and direct each student on an individualized personalized basis to just that piece of knowledge which that student needs to complete the picture, just that piece of the jigsaw puzzle which that individual student needs to complete the picture.

So as I like to put it the adaptive textbook will read you as you read it.

The future of education I like to say is a lot like video games.  And I don’t mean that at all in a pejorative sense.  I mean it in the following economic sense.  If we think about a major video game like Halo, the companies are spending $50 million to $100 million to produce these games.  That makes sense because you are selling to a large audience.  For the first time in education it is possible that we are going to have a million people taking the same course.  That means it is going to make sense, economic sense to invest $50 per student; it is not unreasonable to have a $50 million course.  That would be completely reasonable.

Now think about how a video game is produced.  It is not produced by one person.  It is produced by a team of computer scientists, of graphic designers, of artists, of voice actors, even psychologists.  Now why would a video game designer, why would a video game company hire a psychologist?  The reason is that for a really good video game you want to keep the players just on the edge between frustration and boredom.  You don’t want them dying all the time so they get frustrated and quit.  Nor do you want it so easy that they get bored and quit.  You want to keep them on that edge.

Now if you think about it it is exactly what we went to do as teachers in education.  We want to keep our students just on that edge between frustration and boredom so that they continually feel they are advancing, they are getting better, they are learning, they are progressing but they are not bored and they are not frustrated.

So a team-created approach to education is going to be very important as we move forward.

My own efforts in this are just beginning with Tyler Cowen.  We started Marginal Revolution University or MR University or Mister University for short.  Online economics is our specialty.  We have a whole bunch of different courses.  Most of them are quite low-tech narrated power point.  More recently we’ve been investing more in producing our principles of economics course and we are going to show one of those videos, just about a three-minute video to give you some idea of what can be done as we move forward.

Let me just tell you one more thing about that video and all the videos in the Principles of Economics class.  They are all closed captioned, subtitled, captioned in English, so they all have professionally created English captions.  And that is interesting because once you have the English captions you can machine translate, Google will do it for you automatically, into pretty much any language in the world.  So the machine translation is not great but it is actually not bad either.

So already just with the English captioning we now have any student from anywhere in the world can, just with one click, get captions in their own language in Arabic, in Chinese, in Japanese, in Korean, you name it.

And then that leaves me with my last point.  And that is the opportunities in particular for this audience.  You know Paul Samuelson, the Nobel Prize winning liberal economist, he once said that “I don’t care who writes the nation’s legislation so long as I get to write the nation’s textbooks.”  Well, with online technologies we actually have the opportunities to rewrite not just this nation’s textbooks but to rewrite the textbooks of the world.

Thank you very much.