In this time of uncertainty, in which public opinion seems unusually volatile, it is necessary for our politicians to tell us what they believe. Jeremy Corbyn does not hesitate to do so and as a result has acquired a sudden and unforeseen following among the young. To the distress of their supporters the Tories have not followed his example but have remained in a state of dither and disunity, even though their party could, if it chose, call upon a great tradition of social and political thinking that is far more plausible than the leftist ideology of the Momentum movement.

So I argue: it has always astonished me that Conservative politicians seem to be so reluctant to explore the true foundations of their cause.

Conservatism is what its name says it is: the attempt to conserve the community that we have — not in every particular, since, as Edmund Burke put it, “we must reform in order to conserve”, but in all matters that ensure our long-term survival and mutual support.

We enjoy valuable assets: peace, security, democracy and historic liberties. And these good things, which depend upon the uncoerced co-operation that they also encourage, are both easy to destroy and, once destroyed, hard to rebuild. Moreover, they all depend on other, deeper and less easily comprehended things. They depend on a shared sense of belonging among strangers whom we nevertheless can trust. They depend on traditions of education, co-operation and compromise.

Most of all they depend upon specific institutions and forms of life that have come down to us not as the universal inheritance of humanity but as the legacy of our long-standing attempt to live together as a nation on the island that is ours.

Foremost among those institutions are parliament and the common law.

What is not so obvious and what it is the duty of conservative politicians to articulate is the way in which those relations of dependence can unwind.

The mass immigration of communities who define their political membership in religious rather than secular terms; the transfer of sovereignty from parliament to unelected officials in foreign countries and foreign courts of law; the disruption of the common law by the abolition of the tutelary office of lord chancellor and the creation of a continental-style Supreme Court; the assault on national unity caused by creating a Scottish parliament while leaving the English with no assembly of their own — all these changes have occurred with only the most muted of protests from the Conservative Party and certainly with no attempt to articulate in a coherent way what is really at stake in them, namely our survival as a distinctive sovereign body.

There is no excuse for this. For the conservative tradition of political thinking is as firmly established and as clearly argued as any of its modern rivals.

From Richard Hooker to Michael Oakeshott, and from Baron de Montesquieu to Pierre Manent, the most powerful thinkers in the realm of political philosophy have been conservatives. There is no excuse for politicians to ignore their arguments or to improvise through each emergency without troubling to notice that a fundamental cause of the emergency is their own ignorance of what is at stake.

It is true that briefly, under the influence of Margaret Thatcher’s blustering common sense, conservatives referred to the Austrian defence of the market economy and to Friedrich Hayek as its principal advocate. But when Tony Blair began his assault on the judiciary, no conservative seemed to be aware of Hayek’s brilliant defence of the common law or of the authoritative account of our precious legal inheritance given by Frederick Maitland and Albert Dicey.

As a result an immensely damaging constitutional change took place almost unnoticed by the critical public and virtually unopposed in parliament.

Likewise, even when the dangers of “multiculturalism” have been apparent to everybody else, no conservative has been prepared to articulate the idea of a diverse but unified civil society and its corporate persona, to which Georg Hegel and Burke devoted their most luminous pages.

As a result we have blundered into a condition of mass immigration with no philosophy that will justify the attempt to limit it. And when, in the recent Brexit vote, the people were finally given the chance to affirm their belief in national sovereignty, the only ideas that occurred to David Cameron and George Osborne, in their attempt to mystify the issue, were phoney economic predictions, as though the first person plural of politics, the “we” of national sovereignty, were merely a matter of being as wealthy as we possibly can.

Indeed, if there is a single most deplorable intellectual failing on the conservative side, it lies in reducing every question of law, constitution, culture and society to a question of economics — the fundamental error of the Marxists, which nobody on the left would now dream of committing.

All is not lost, however. The appearance of a radical leftist at the head of the Labour Party is a wake-up call that might rouse even the Tories from their “dogmatic slumbers”.

A wonderfully rich tradition of social and political thinking awaits their rediscovery. In the face of the tragedy of Grenfell Tower they might at last read what John Ruskin had to say about architecture and the need for streets; they might even begin the work of undoing the destruction of London at the hands of its only Tory mayor.

In response to the anxiety over education they might turn to their primary authorities in Matthew Arnold, TS Eliot and François-René de Chateaubriand.

Who knows — they might even get round to studying the philosophical sources of the American constitution so as to understand what “we the people” really means. Then they will be ready to defend our country and its interests in what is likely to be a genuine emergency. 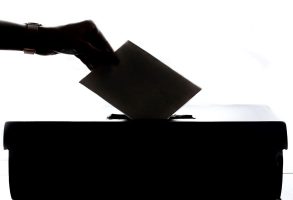 As conservatives contemplate how to respond to the threat of managerial oligarchy, we should, of course, be humble—but we must not be so afraid of our own imperfections that we are paralyzed into acquiescence under an evil system.