The Imprint of Battle 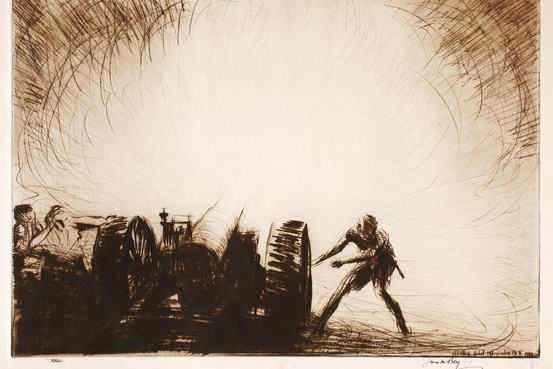 The Great War: Printmakers Of World War I

When the firing ceased in 1918, the belligerents of World War I counted their dead, missing and wounded. They numbered not in the thousands or hundreds of thousands, as in previous wars, but in the millions.

A century after the carnage, the British artists whom art historians deem most consequential are those who reacted most aggressively against the heroic tradition of war painting, both in style and in content. We now automatically associate the Modernist works of Christopher R.W. Nevinson, David Bomberg and Paul Nash with the Great War just as much as we do the bitter and disenchanted poetry written by Wilfred Owen and Siegfried Sassoon. But seeing the conflict exclusively through their eyes leads us to neglect other talented artists who pictured the war in more conventional ways that the general public could readily understand. And so it is that many admirable artists who depicted the conflict, such as Henry Tonks, William Orpen and even John Singer Sargent (in his wartime paintings), are often undeservedly neglected.

The persistence and importance of this more traditional approach is seen in the Virginia Museum of Fine Arts’ “The Great War: Printmakers of World War I,” which commemorates the centenary of the first year of the war in a focused, informative exhibition of 28 prints. These high-quality etchings, engravings, lithographs and dry points, all accompanied by helpful explanatory labels, chronicle the war from the British Isles to the deserts of the Near East.

The exhibition showcases several distinguished artists known mainly to connoisseurs. Remarkably, prints by some of them can still can be bought at bargain-basement prices, so visitors whose interest is sparked by the show won’t need very deep pockets to acquire their works, which are often dazzling masterpieces composed only of line, light and tone.

Three large lithographs of naval shipyards are by Muirhead Bone, an artist who was part of the Etching Renaissance of the late 19th century led by James McNeill Whistler and his brother-in law, Francis Seymour Haden. Bone depicts the shipyards as dynamic linear networks of scaffolding, cranes and derricks that dwarf the workers who operate them. The vigorous foreshortening and vertiginous angles of his “A Shipyard Seen from a Big Crane” (1917) makes one wonder if Joseph Stella had seen it before he composed his “Brooklyn Bridge” just a few years later.

Bone’s “Shipyards” are an example of many images of wartime Britain. Artists, particularly women who couldn’t travel to the front lines, boosted civilian morale by depicting and celebrating citizens’ contributions to the war effort in such places as farms and munitions factories.

Dating between 1919 and 1936, Kerr Eby’s prints are entirely different. A Canadian who served on the Western Front, he volunteered for the U.S. Army in 1917, the year the country entered World War I. His etchings, some of them done years after the war, show the hard slough of the ordinary soldier. In “Dawn, the 75’s Follow Up” (1919), a column of soldiers accompanies a horse-drawn French 75mm field gun, a mainstay of the American artillery. The column trudges past an empty house toward the shattered ruins of another building. The soldiers’ heads are downcast, their faces obscured by shadow. Surrounded by wreckage of war and soaked by rain, marvelously rendered by the artist’s skillful use of the white of the paper and ink, this is the dull, unglamorous routine of the Doughboys between the terrors of fighting.

The seven prints and drawings of another soldier-artist, James McBey, are the highlights of the exhibition. While serving in France, McBey, a Scottish autodidact, made drawings and prints, including the macabre “The Carpenter of Hesdin” (1917). Shrouded in shadow, the elderly carpenter, working with a bandsaw in this Western Front town, is watched by two children darkly silhouetted against a background window. What, at first glance, appear to be stacks of boards surrounding him are, on closer inspection, hundreds of identical crosses destined for the graves of soldiers. Mechanized production of these grave markers was a necessity: On just the first day of the battle of the Somme about 20,000 British soldiers died. Interestingly, an official censor who signed the bottom of the sheet approved this chilling image for publication.

In 1917, McBey became an official war artist traveling with the Egyptian Expeditionary Force. His “Zero. A Sixty-Five Pounder Opening Fire” (1918-20) documents the first salvo aimed at the Ottoman Turks’ forces. Two agitated soldiers in the foreground, drawn in wiry, nervous lines, cup their hands over their ears as another fires the weapon. McBey uses just the white of the paper in front of the barrel to make an enormous muzzle flash, which pierces the twilight and casts the gunners into shadow. This is a brilliant use of the black-and-white print medium.

Much the same can be said of McBey’s “Dawn. The Camel Patrol Setting Out” (1917-1919). The artist was with the Imperial Camel Corps when they began their trek to Beersheba in the Negev. The camel train moves across the flat desert and into the space, gradually diminishing in size as the most distant riders near the sweeping horizon. The brightening sky, again created only by the white of the paper, is fringed with the nighttime darkness still remaining at the top of the print. McBey has fashioned a barren, almost limitless land of sand and sky through which the soldiers ride toward their destiny. There’s a romantic and heroic quality to this print, very much like the desert marches in David Lean’s “Lawrence of Arabia.” In fact, McBey met Lawrence in Damascus and painted a fine portrait of him. The artist’s exceptional portraits, landscape paintings and prints are now sadly neglected.

The most harrowing print in the exhibition is by the little-known Percy John Smith, another British soldier who fought in France. In “Death Awed” (1919), a tall, veiled skeleton, Death, stands on the duckboards of a trench in front of a blasted landscape. Surprised, he looks downward toward two combat boots from which protrude only broken bones and tendons, the remains of a solider blown apart. So ghastly is the sight that even Death, the Grim Reaper, is stunned by it. Could there be a more apt image for the charnel house that was World War I?

Mr. Cole, former chairman of the National Endowment for the Humanities, is a senior fellow at the Ethics and Public Policy Center.