Remarks on the Hungarian translation of Redeeming Economics 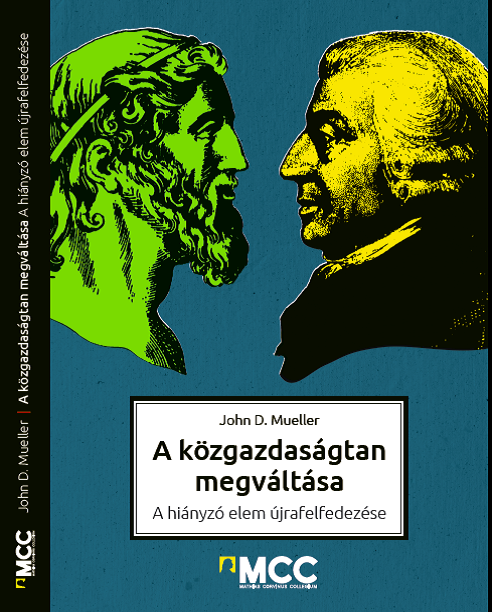 Let me briefly outline its content, and then explain how I came to write the book.

J. Daniel Hammond of Wake Forest University opened a review by remarking, “Redeeming Economics is likely to be ignored by economists”; then gave this admirably succinct summary:

What, according to Mueller, is wrong with economics? In the simplest terms familiar to economists, there is an “equation” missing from the model. Economists have “equations” for production, consumption, and exchange, but not for the primary economic choice – the choices of persons. This missing element is a theory of distribution. Mueller argues that Thomas Aquinas had a complete economic model, with all four elements. Drawing on Aristotle and Augustine, Aquinas’s economics explained production (what is produced and how), consumption (utility), exchange (commutative justice), and distribution (production or purchase for whom).

Adam Smith, the father of modern (classical) economics, dropped two of the four equations, those for consumption and distribution. With neoclassical economics the equation for consumption was restored. But neoclassical theory has nothing to say about distribution, leaving the restoration of economics incomplete. Mueller sees this reconstruction (redemption) continuing with his book, with the efforts of other nascent neo-Scholastics and, he predicts, eventually by the profession at large. Thus Mueller himself does not think his book will be ignored. Or perhaps, if it is ignored the deficiency of economics will become evident to practitioners from their experiences doing economics. Mueller expects that economists will find their way to a neo-Scholastic economics that will preserve the best of both Smith and the neoclassicals, while restoring the theory of distribution.[1]

Mine is the latter view: that “the deficiency of economics will become evident to practitioners from their experiences doing economics.” With fewer equations than variables to be explained, the classical and neoclassical systems are “underdetermined,” requiring economists to adopt circular logic or empirically false assumptions (or both). I realized this by the accident of becoming a financial market forecaster, which requires spelling everything out verifiably

But in terms that most ordinary people can understand, the scholastic, classical, and neoclassical systems presuppose three different views of human and divine nature, differing on whether man and God have free will. In part, I contrast what Nobel economics laureates George J. Stigler and Gary S. Becker of the University of Chicago called the “economic approach to human behavior” with the “human approach to economic behavior” presupposed by (neo-) scholastic economics.

I use the term “redeem” in the sense of “fulfill (an earlier promise or pledge).” If, as I believe, the next phase in economics is Neoscholastic, it will have fulfilled its original promise.

I’m especially grateful to my friend János Csák–a real Renaissance man–for translating Redeeming Economics into Hungarian, together with Zoltan Abraham. Janos asked me to describe briefly how I came to write the book.

I suppose it was the accident of my recovering from college atheism while becoming an economic forecaster. I had first read the “AAA’s” — Aristotle, Augustine, and Aquinas — in high school and college. But I had to return to them as I realized that my atheism was logically untenable. That was mostly while I worked for then-Congressman Jack Kemp, as he persuaded President Ronald Reagan to adopt his economic ideas (and incidentally giving me free run of the Library of Congress).

Afterward, some colleagues and I started an economic and financial market forecasting firm, for which I crunched numbers for 26 years until January 2015.[2] When I took time off to write the book, I found I had something to say that most economists don’t know–because, starting in 1972, economics departments at most universities abolished the previous PhD requirement that one must master the history of economics. The discipline of being a forecaster helped me realize that the logical and mathematical structures of Thomas Aquinas’s original scholastic economics, Adam Smith’s classical economics, and today’s “neoclassical” economics all differ fundamentally. And thanks to the “AAAs,” I had learned more economic theory than is taught in modern economics–the main difference being what the book’s subtitle calls “the missing element,” which describes our interpersonal relations of love and hate–at the personal level gifts (and their opposite, crimes) and at the domestic and political levels, what Aristotle called “distributive justice.”

Redeeming Economics presumes only the natural law: what we can know by reasoning from common experience. Though comprising the largest single religious denomination, Roman Catholics make up less than one quarter of the U.S. population. But as I will note later this week at a conference co-sponsored by KETEG (Christian Social Principles in Economy), (neo-) scholastic economics also provides the analytical “toolkit” necessary to understand and explain Catholic social doctrine.

Click here to purchase a copy of the English-language version of Redeeming Economics.