(A video of this presentation may be viewed starting at 16:27 below or by clicking here.)

Panel on Social and Economic Costs of Family Breakdown 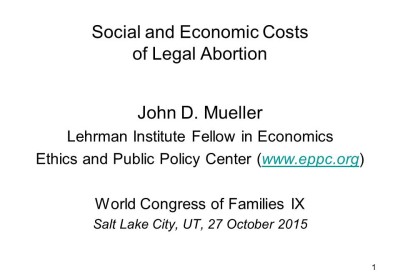 At the World Congresses of Families in Warsaw,[1] Amsterdam,[2] and Madrid,[3] and the demographic summits in Moscow and Ulyanovsk,[4] I presented and updated a country-by-country model of fertility, which has since been published in my book Redeeming Economics.[5]

Today, I’d like to extend that analysis and reverse the causality implied by the title of our panel, “Social and Economic Costs of Family Breakdown,” Instead I will explain why legal abortion is the main cause of family breakdown, including specifically the rise in rates of divorce, illegitimacy and crime, and entry of most developed nations–now including the United States–into “demographic winter.” 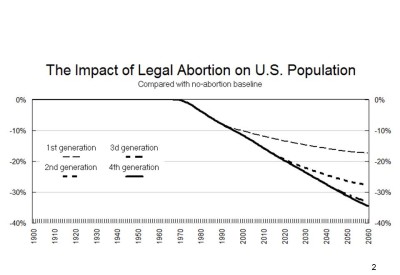 Fifteen years ago I published a paper on the “Socioeconomic Costs of Roe v. Wade.”  In it, I estimated the impact of legal abortion in reducing the U.S. population (about 20% so far) and concluded, “taken in its entirety, legal abortion is perhaps the single largest American economic event of the past century, more significant than the Great Depression or the Second World War.”[6] 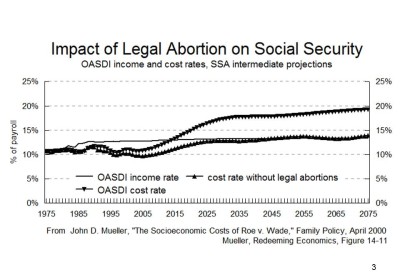 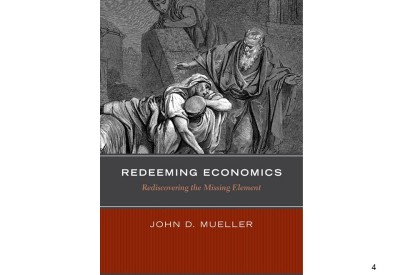 I was just starting the book which systematized these insights. The cover features Gustave Doré’s engraving, “Arrival of the Good Samaritan at the Inn” because, transcending nationality and religion, the parable illustrates all the possible economic transactions we can have with our fellow man: the robbers beating a man and leaving him for dead illustrate crime; the priest and Levite who passed him by illustrate indifference; the innkeeper’s bargain with the Samaritan illustrates justice in exchange; and finally, the Samaritan’s devotion of time and money to restore the beaten man to life illustrates a gift. Crime, indifference, just exchange, and gift: this is the range of possible transactions, described by St. Augustine and incorporated by Thomas Aquinas in the original scholastic economics.[9] 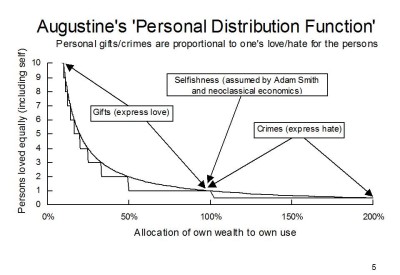 In contrast, the premise of modern economic theory was expressed by Adam Smith’s famous assumption in the Wealth of Nations that “every individual . . . intends only his own gain.”[10] “Neoscholastic” economics differs from Smith’s “classical” and today’s “neoclassical” economics chiefly in retaining Augustine and Aristotle’s theory of distribution: comprising gifts (and their opposite, crimes) and what Aristotle called “distributive justice” as well as exchanges. This also makes the neoscholastic theory much more accurate. 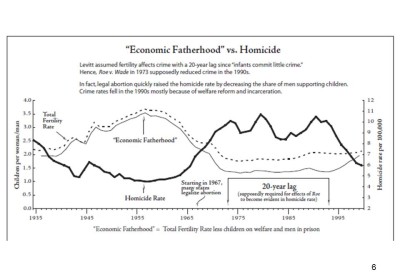 For example, updating scholastic theory refutes the famous claim by economist Steven D. Levitt, featured in his megabestseller Freakonomics, that the U.S. Supreme Court’s legalization of abortion in 1973 caused the crime rate to fall 15-20 years later, by eliminating potential criminals.[11] 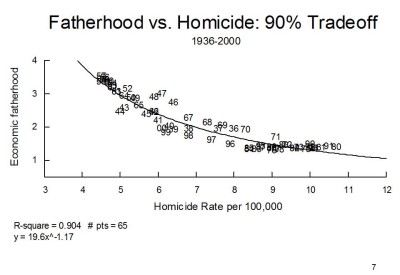 In fact, there is a 90% current inverse relation between “economic fatherhood” and homicide.[12] Legalizing abortion raised crime rates immediately and with a lag by turning new fathers back into men without dependent children.

The “Neoscholastic” fertility model is also more accurate.  Just four factors explain most variation in birth rates among the 70 countries for which sufficient data are available (comprising about one-third of all countries, but more than three-quarters of world population).[13] 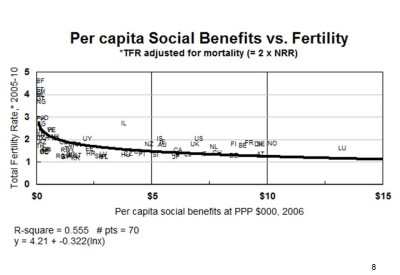 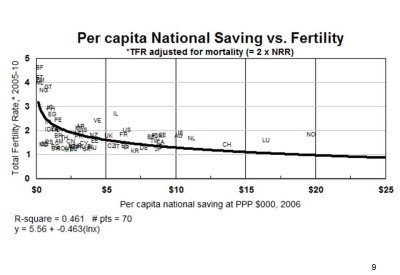 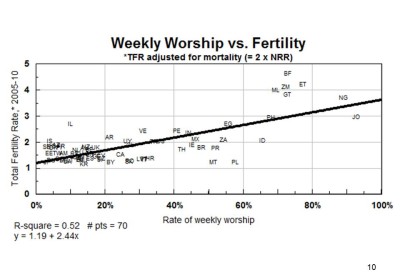 Finally, the birth rate is strongly and positively related to the rate of weekly worship. This is because all gifts of scarce resources—whether rearing a child or worship—require the same lowering of self and raising of others in our scale of preferences for persons. On average throughout the world in 2005-10 (adjusted for differences in mortality), a couple which never worshipped had an average of 1.2 children; but the average couple which worshipped at least once a week had 2.4 more—an average of 3.6 children.[14] 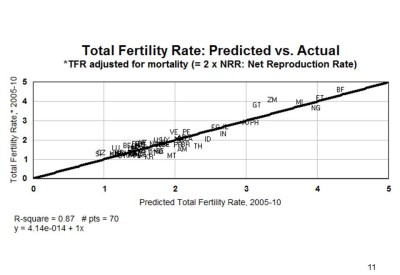 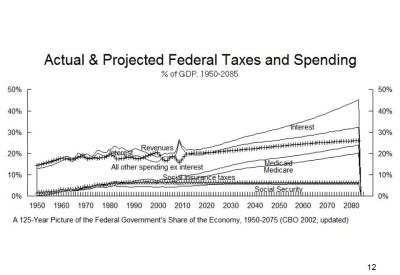 [What does this mean for policy? Based on current projections, the federal budget would substantially increase federal social benefits as a share of GDP. Because of the strong inverse relation between the birth rate and per capita social benefits, I project that the U.S. birth rate will fall significantly under current law, from about 1.83 to about 1.64 children per couple. These projections indicate that the budget is likely to shift U.S. society to conditions approximating the Trustees’ “High-Cost Assumptions.”] 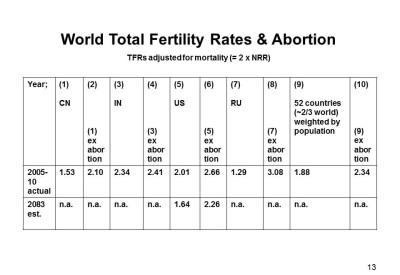 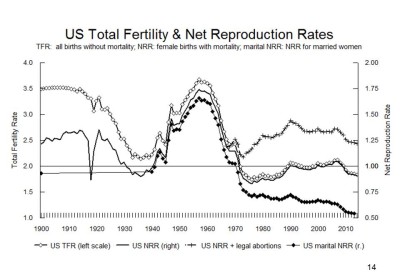 Of course, the birth rate does not reflect illegitimacy, which has risen from less than 4% in 1940 to  more than 40% of all U.S. births. As Janet L. Yellen–yes, that Janet Yellen–and her husband George A. Akerlof were surprised to discover, legalizing abortion contributed to a retreat from marriage: “Although many observers expected liberalized abortion and contraception to lead to fewer out-of wedlock births, in fact the opposite happened [particularly] because of the erosion of the custom of ‘shotgun marriages.”[16] 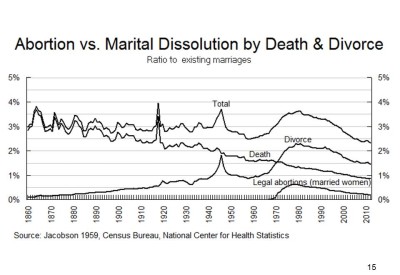 The role of legal abortion is obvious from its exact proportionality to the divorce rate. 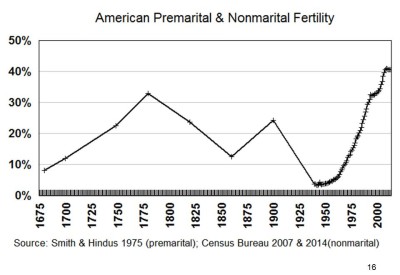 Many fear that marriage in America is going irretrievably to hell in a handbasket. I would caution against the WSIATI fallacy: that What You See Is All There Is (WYSIATI). Data back to colonial times show that American marriage went to hell in a handbasket before. Extramarital conceptions were about one-quarter in 1900 (same as in 1986) and one-third in 1776. I don’t claim another Great Awakening, like the one  I was blessed to be born in, is inevitable; but I do claim that the handbasket is not. 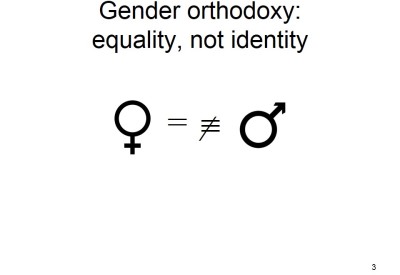 I would like to close by endorsing two correct innovations by Pope Francis: first, his rejection of “gender ideology,” which mistakes gender equality  for  gender identity; and second, his rejection of the prevailing theory of “sustainability’s” premise, that “Population control is the sine qua non of sustainable development”[17];  he points out that “concern for the protection of nature is … incompatible with the justification of abortion.”[18] In short, “demographic winter” is unsustainable for “human ecology.”

Economics has been called the ‘dismal science.’ But I like to emphasize that my message is one of hope. All the unfavorable trends we have discussed here are reversible if we reverse the policies which caused them. Ronald Reagan was right: “There are simple answers – there just are not easy ones.”[19]

[2] John D. Mueller, “How Do Nations Choose ‘Demographic Winter’? Is America Doing So?” Remarks at the Fifth World Congress of Families Panel on “Family and Demography,” Amsterdam,, Netherlands, 11 August 2009,  http://www.worldcongress.org/wcf5.spkrs/wcf5.mueller.htm and http://www.eppc-stage.local/publications/pubID.3911/pub_detail.asp

[3] John D. Mueller, “Babies and Dollars: Babies and Dollars: Implications for USA, Russia, and the World,”  available at http://demographia.ru/eng/articles/index.html?idR=80&idArt=1946 and http://www.eppc-stage.local/programs/economics/publications/programID.41,pubID.4522/pub_detail.asp.

[9] As Augustine noted, a crime is the opposite of a gift: taking from other persons their own goods. As with “legal” abortion, the objective facts remain the same whether or not the crime is recognized as such by human law. Augustine, On Christian Doctrine 3. 10. 16 (Grand Rapids: Christian Classics Ethereal Library), pp. 396-97, http://www.ccel.org/ccel/augustine/doctrine.xi_2.html.

[12] “Economic” fatherhood is defined not by biological paternity nor residency with but provision for one’s children. Specifically, “economic fatherhood” equals the total fertility rate, with fertility rates for white and nonwhites mixed in the same proportion as among men admitted to prison, removing children on welfare (who are not supported by their fathers) from the numerator and men in prison (who cannot support their children) from the denominator.

[13] The model was first published in John D. Mueller, “How Does Fiscal Policy Affect the American Worker?” Notre Dame Journal of Law, Ethics and Public Policy Vol. 20 No. 2 (Spring 2006), 563-619; available at http://www.eppc-stage.local/publications/pubID.2671/pub_detail.asp

[14] Regular worship is not only positively related to fertility in a roughly linear fashion. It is also inversely related to the incidence of abortion, which (like crime in general) rises exponentially as the rate of worship declines. Data on abortion rates by country from “Abortion statistics and other data,” by Wm. Robert Johnston. Last updated 19 September 2015, available at http://www.johnstonsarchive.net/policy/abortion/

[15][15] Fertility rates should be adjusted for differences in mortality rates. The Net Reproduction Rate (NRR) represents a hypothetical woman whose experience matches the average rates of fertility and death of all women in a given year. (The Total Fertility Rate measures fertility alone.)  An NRR of 1.00 indicates that each woman bears exactly one surviving daughter. The Total Fertility Rates used in the model equal twice the NRR. For example, the TFR in Mali in 2006 was 7.42, but the NRR was 1.987, which corresponds to a TFR of 3.97 children per couple. In other words, in Mali the typical couple had about 3-1/2 children simply to compensate for the likelihood of premature death before reaching child-bearing age. United Nations, Department of Economic and Social Affairs, Population Division, World Population Prospects: The 2008 Revision, New York, 2009; http://data.un.org/Data.aspx?d=PopDiv&f=variableID%3A48.

[18] 120. “Since everything is interrelated, concern for the protection of nature is also incompatible with the justification of abortion. How can we genuinely teach the importance of concern for other vulnerable beings, however troublesome or inconvenient they may be, if we fail to protect a human embryo, even when its presence is uncomfortable and creates difficulties? “If personal and social sensitivity towards the acceptance of the new life is lost, then other forms of acceptance that are valuable for society also wither away.” Pope Francis, Encyclidal Letter Laudato Si,’ “on Care for Our Common Home,” [quoting Benedict XVI, Encyclical Letter Caritas in Veritate (29 June 2009), 28: AAS 101 (2009), 663]

[19] “For many years now, you and I been shushed like children and told there are no simple answers to the complex problems which are beyond our comprehension. Well, the truth is, there are simple answers – there just are not easy ones.”  Ronald Reagan, Inaugural Address, January 5, 1967, http://www.reagan.utexas.edu/archives/speeches/govspeech/01051967a.htm