Over the 33 years since its publication, I’ve quoted one particular text many times. Paradoxes of Faith (Ignatius Press) is a collection of thoughts by Henri Sonier de Lubac.  Brief and simple, yet enormously rich, it’s a treasure house of Christian wisdom.  And that should surprise no one.  Lubac (1896-1991), a French Jesuit, ranks as one of the great religious thinkers of the last century.  He was a prodigious author, a major influence on the Second Vatican Council, and a theologian revered by Popes Paul VI and John Paul II.  But Paradoxes of Faith is not for the scholarly few.  It’s a text for Everyman: the kind of book a reader can pick up, browse for spiritual refreshment, put down, and return to again and again. 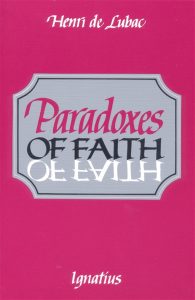 The man behind the book is worth noting.  Seen as a progressive in his youth, Lubac was active in the “spiritual resistance” to the Nazi occupation of France and its Vichy puppet regime.  He spent much of World War II in hiding.  The novelty of his thought drew distrust and criticism as insufficiently neo-Thomist in the 1950s, and his work was sharply restricted by his Jesuit superiors for several years.  He was also a friend of Pierre Teilhard de Chardin and, to Rome’s annoyance, a strong defender of his controversial fellow Jesuit.

Nonetheless, Pope John XXIII appointed Lubac to the preparatory commission for Vatican II.  He then served as a peritus, or theological expert, at the council, where he helped to shape both of its constitutions on the Church, Lumen Gentium and Gaudium et Spes. As a result, time has been rightly generous to Lubac’s legacy.  His books The Splendor of the Church, The Drama of Atheist Humanism, and Catholicism: Christ and the Common Destiny of Man, all available from Ignatius Press, have enduring beauty and power.

And yet the most curious events of the great man’s life occurred after Vatican II.  I met and interviewed Lubac at his home in Paris in 1985, thanks to mutual friends at the French edition of the international theological journal Communio. He lived on the city’s Left Bank at 42 rue de Grenelle in the 7th arrondissement: a large Jesuit house where he was transferred after John Paul II named him a cardinal in 1983.  I remember four things vividly about the afternoon I spent with Lubac: his white hair, his frayed black suit, his kindness, and his modesty.  He was utterly unimpressed with himself.  As it turned out, his Jesuit brothers were even less impressed, though far less excusably.

The reason for Lubac’s chilly treatment by his Paris community after Vatican II was simple:  He opposed the growing substitution of the word “universal” for “Catholic” in Church discussions, and he had an open distrust of sociology and psychoanalysis.  Along with theologians Hans Urs von Balthasar, Joseph Ratzinger, Jean Danielou, and Louis Bouyer, he also criticized the theological journal Concilium for not being adequately faithful to the true meaning of Vatican II.  Lubac had a personal hand in launching the French edition of Communio, with its first issue released in September 1975.  He took an active part in board meetings, suggested writers, reviewed articles, asked for corrections and improvements, etc.  Later, as his strength ebbed, Communio executive committee meetings moved to his residence at the time, a small apartment on the rue de Sèvres.

As Communio veterans recount, Lubac’s Jesuit leaders in Paris viewed him, with exquisite irony, as an old conservative bore, still immersed in the Church Fathers and medieval scholasticism, and uninterested in the social sciences. When the first issue of Communio appeared, his house superior declined to circulate it on the grounds that it was “not in line with our [local community’s] pastoral strategy.”

In the words of one of Lubac’s surviving Communio colleagues, things got steadily worse.  When John Paul named Lubac to the College of Cardinals in 1983, lay friends were forced to purchase his red cassock and related garb, because his superiors felt that any money spent on Lubac’s honors would be redirected from the poor. They also resisted paying for Lubac’s return flight from Rome, but eventually relented.  Lubac then admitted to a Communio colleague that he also needed, but couldn’t afford, a decent black suit for his Rome investiture trip.  His entire wardrobe consisted of two pairs of trousers, one non-matching jacket, a few shirts, and minimal underwear which he washed himself.  As one lay friend recalls, “I had to threaten the provincial to reveal to the press how they treated the old man. So he sent the community’s bursar to Lubac’s flat, and he examined his wardrobe. He decided that one of the two pairs of trousers was still good enough and that buying just one new jacket would suffice.”

On the brighter side, Lubac enjoyed a close and very fruitful friendship with Hans Urs von Balthasar, who’d been Lubac’s pupil in Lyons and whom he deeply admired. He often told Communio friends that he himself was just a simple student of the Catholic Tradition, whereas Balthasar was a genius.  Lubac was also a friend and admirer of Karol Wojtyla. When he arrived in Paris in 1974, he immediately pressed for the launching of a Polish edition of Communio, under the leadership of the young Polish bishop – Wojtyla – whom he’d met at the council.  He kept repeating, said one colleague, that he’d never met anyone with such intellectual acumen, spiritual strength, and pastoral foresight.  “We only politely listened,” said the friend, “until John Paul II proved how right Lubac had been.”

Lubac could be harsh toward his fellow Jesuits and the Society’s evolution in the 20th century. He felt that a grave mistake had been made after World War II when the Society (in his view) decided that the challenge of the future was Marxism – which, he complained, had led to investing their best young men in the philosophy of Hegel and his posterity.  This meant giving up the centuries-old Jesuit strategy of educating elites to be more sensitive and committed to the poor; the poor who must be helped, but often cannot help themselves, at least intellectually. He also strongly disagreed with any interpretation of Vatican II as breaking away from a supposedly “sterile” Catholic past to embrace modernity uncritically.

The question remains whether Lubac was more painfully misunderstood before or after Vatican II.  At least some of his lay Paris friends would argue that his situation was worse after it.  Lubac’s mistreatment by his Jesuit brothers was not openly vulgar or brutal. It was just hypocritical and mean-spirited. Lubac stressed to friends privately that he himself had never really changed. But the times and prevailing wind had.  Thus, some of the very same conformists (or their clones) who had once hailed him as “boldly progressive” and “adventurous,” now dismissed him as “fearfully conservative” and “outmoded.”

In the end of course, Lubac’s patience in the face of mistreatment – first by Rome, and later by his Jesuit brothers – simply magnifies the immense integrity of the man and his service to the Church.  He understood the human predicament, the grandeur of God’s love, and the beauty of the Church with extraordinary clarity and fidelity.  Which is why, as I said at the start of these brief comments, I return to Paradoxes of Faith so often.

My dictionary defines a paradox as a seeming absurdity or impossible contradiction that somehow turns out to be true.  Each of us has hard days when words like “absurdity” and “contradiction” seem to capture the essence of a faithful Christian life.  But as Lubac knew from experience, and better than most, “Remember, after all, that the Gospel is full of paradoxes, that man is himself a living paradox, and that according to the Fathers of the Church, the Incarnation is the supreme Paradox.”

Why We Hunger for Beauty Beauty is an affirmation of our shared human dignity. It reminds us of life’s goodness in an age of transgressive narcissism and repudiation of the past.