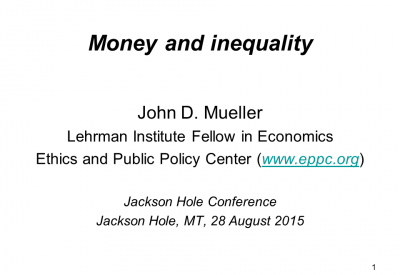 Concerning “The Monetary Status Quo and Its Consequences,” I’d like to discuss money and inequality among American households. 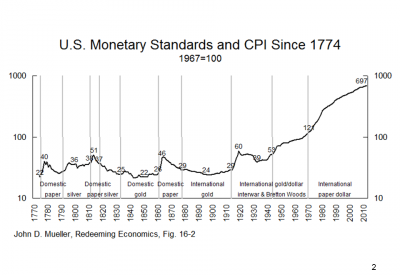 I’d like to add a dimension to Larry White’s analysis. As this chart from my book shows, the CPI has varied since 1774 depending not only on whether the dollar was on a metallic or paper standard, but also whether other countries’ currencies were on a dollar standard.

The Federal Reserve sang  “Happy 100th Birthday to Me” so loudly that most economists ignored an equally baleful centenary:  John Maynard Keynes’s reserve currency scheme. When the Federal Reserve was signed into law on December 23, 1913, the world was on the international gold standard–as Larry White demonstrated, objectively the best monetary system in both American and world history, whether measured by average price stability, strong economic growth, or minimum volatility in the CPI and real GDP.

But Keynes argued in Indian Currency and Finance (1913) that whether a central bank holds reserves in gold or foreign exchange “is a matter of comparative indifference,” and that “India, in her  Gold-Exchange Standard…far from being anomalous, is in the forefront of monetary progress” toward “the ideal currency of the future.” Keynes advocated the official reserve currency roles of sterling and the dollar which he and other British experts convinced the great powers to adopt in 1922. 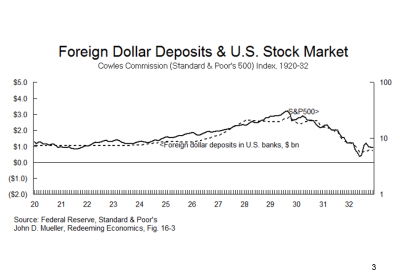 In 1932, the French economist and central banker Jacques Rueff explained Keynes’ error and its role in the 1931 financial crisis and Great Depression. He noted that the international gold standard began and ended with monetary conferences in Genoa. The first, meeting from 1445 to 1447, ended the 90 percent currency depreciation of the Hundred Years War, by establishing the gold florin as the standard for international payments.

The second Genoa conference, in 1922, adopted Keynes’s proposal of “‘economizing on the use of gold by maintaining reserves in the form of foreign balances,’ that is, the ‘gold-exchange standard.'” When a central bank accepts dollar debt as official reserves instead of gold, Rueff pointed out, purchasing power “has simply been duplicated, and thus the American market is in a position to buy in Europe, and in the United States, at the same time,” causing inflation. Conversely, liquidating official currency reserves causes deflation.  As this chart shows, the timing of credit duplication and contraction matches the 1920s stock market boom and 1930s bust. 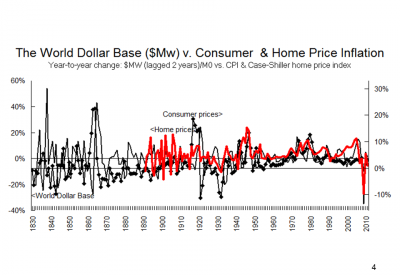 As far back as we have data,  consumer and housing price inflation have been determined by the World Dollar Base: total domestic and foreign official monetary liabilities–U.S. currency and bank reserves plus foreign official dollar reserves. This explains the Great Depression, demise of Bretton Woods, and the housing bubble and oil price spike to $150 a barrel that triggered the Great Recession of 2007-2009. 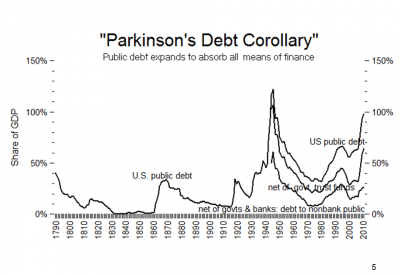 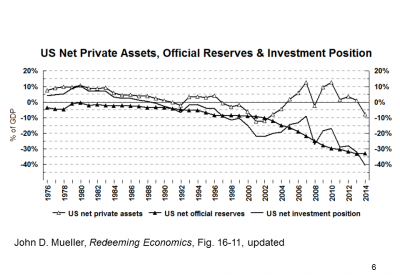 Finally, federal borrowing from foreign central banks equals the decline in the U.S. International Investment Position–even while U.S. private residents remain in balance with the rest of the world! 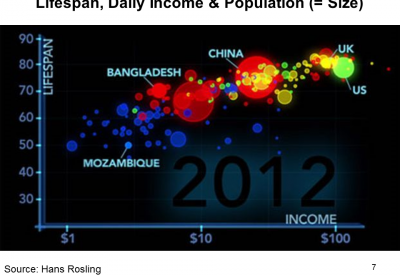 Regarding inequality, let’s start with differences that have nothing to do with monetary policy. That earnest young French socialist Thomas Piketty’s Capital in the 21st Century ignores the fact that most inequality–between and within countries–is due to differences in what Nobel economics laureate Theodore W. Schultz called “human capital”: investments in people. This chart, from a TED talk by Hans Rosling, shows why inequality between countries is disappearing: as people live longer, investing in human capital is increasingly valuable (because its return, labor income, lasts that much longer). 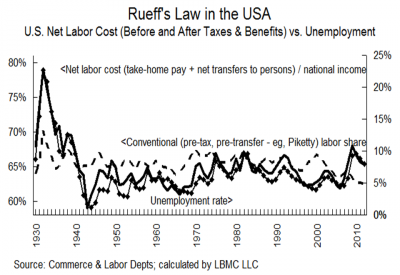 Picketty joined the planet’s wealthiest “1 percent” by cashing in his own “human capital.” Yet his horse-and-buggy production theory excludes “human capital,” instead defining “capital” as “total nonhuman assets.” Picketty was refuted decades before he was born by his compatriot Jacques Rueff, the great French economist I mentioned earlier. Picketty decries the decline in labor’s share of national income—measured “before taxes” and benefits—to advocate steep redistribution from “capitalists.” (The broken line shows the pre-tax, pre-transfer labor share Piketty uses in his book.) “Rueff’s Law” is the relation Rueff demonstrated between labor’s net share of national income and the unemployment rate. It has explained about 90% of variation in the unemployment rate, which tracks the net labor share after taxes and transfers (e.g. social benefits). That tight relationship continued during and since the Great Recession. 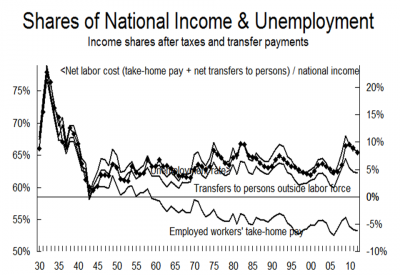 More detail shows that workers’ take-home pay has been reduced—but by expanded shares to the unemployed and those outside the labor force—not “capitalists.” 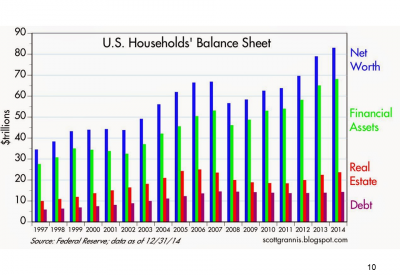 Inequality results from the monetary system. Rueff’s protege Lewis E. Lehrman explained: “The near-zero interest rates, now maintained by the Fed, have primarily benefited preferred banks and their financial clients. A nimble financial class, in possession of cheap credit, can maneuver to protect itself against inflation….But the vast population of middle income professionals and workers, on salaries and wages, and those on fixed incomes and pensions, are impoverished by this very same volatile, inflationary process…. Inequitable access to cheap Fed credit was everywhere apparent during the government bailout of favored brokers and bankers in 2008 and 2009, while millions of not so nimble citizens were forced into bankruptcy. This ugly chapter is only the most recent in a very long century of disruption of the international monetary system.” 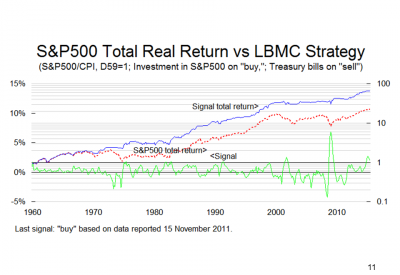 Investing in the financial markets is not rocket science. Before retiring last January, I made my living by advising money managers, basically about when to be out of the market before it was hit by episodes of commodity inflation. But I could never make that advice commercially viable for the small investor, who is at the mercy of storms created by central banks.

It’s time to close that chapter and start a new one, by defining not only the dollar, but all currencies, once again as weights of gold.