Adherents of radical feminism are five decades into a powerful campaign that seeks to shape the way American women think. Politics, fashion, Hollywood, academia, and media propagate a singular vision of womanhood, relying on savvy use of optics, messaging, and even make-up. These radical feminists have done a remarkable job of silencing or sidelining their critics.

Ironically, whether they know it or not, feminists’ unspoken premise insists men are superior to women and women must become like them in the pursuit of equality. Therefore, to be equal, women must be able to eliminate the consequences of sex, like men, and rid themselves of unborn children through unrestricted abortion. Abortion is the crux of most women’s policy issues and is at the heart of the greatest political divisions in the United States.

What we will never see in the splashy pages of Vanity Fair, for instance, are the many happy women who buck the feminist narrative, loving, nurturing, consoling, clothing, cleaning, and adoring their numerous children without trying to live like men. From Maine to Hawaii, these are the women who have opened themselves up to the dramatic and self-sacrificial love required when one person truly loves another. They carry children in their wombs, their arms, their hearts, their minds.

They know the preciousness of a tender embrace from small arms, a little face learning to offer kisses, the peppering of questions from a curious child, and the dig-deep challenges of teenagers—sometimes all in the same hour. Some know the struggle of children with broken bodies, or broken minds, or both. And some know the gaping hole that will never be filled when a child or children are lost. But among them all, there isn’t a single regret in bringing another soul into the world.

While the Huffington Post just announced that “Child-free women are having a bit of a moment in the media,” one wonders what they think the last 50 years have been.

Fly-over women are the moms and daughters and wives and sisters and friends the media overlooks because they are religious or frumpy or don’t have sexy day jobs. They are considered uneducated doormats. Their bodies are often tired, hair not always perfectly coiffed, and nails rarely manicured. Their homes may not be camera-ready, their meals probably aren’t gourmet, and talking points aren’t ready on their tongues. But mostly, the issue is that they don’t believe in abortion and they do believe in the sanctity of marriage.

These unseen and unknown women are the fly-over women found in every American city and state. They’ve been called bigots, lectured to, condescended to, and ignored by those who consider themselves morally superior.

More than anything, these women actively reject the ideology continually advanced by radical feminism. They are tired of the same Marxist effort to reimagine human nature as anything it wants to be. They reject all the latest Marxist fads, propagated with clever sound bites, high-end advertising, and popular hashtags.

Fly-over women know feminist ideology is the weary set of ideas that led us to a country in which millions of women are desperately unhappy—and many are hard-pressed to actually define the word “woman.” There is no happiness in an ideology that foments narcissism, self-absorption, and isolation from the basic cell of civilization: the family. Only a deeply confused culture would seek to replace the word mother with “birthing person” or breastfeeding with “chest-feeding.”

The fly-over woman understands her womanhood and motherhood deep in her bones and doesn’t see maleness as a goal to achieve or person to conquer. She knows she needs men. She knows, as women have for millennia, that being a woman is synonymous with carrying something.

Women traditionally have been seen as a kind of vessel that transforms whatever it holds. We see it in the Romance languages, where words like “ocean,” “ship,” and “oven,” are feminine. This is why boats are named after women.

Women are also known for their tenderness, compassion, and care for others. This isn’t accidental, but part of our ability to hold others physically, mentally, emotionally, and spiritually. When these gifts are rejected, women suffer, men suffer, children suffer. The whole of society suffers.

We are living amid a tremendous societal experiment that is revealing dramatically what happens when you denigrate the most fundamental, beautiful, and tender bond on earth—the bond between a mother and child. When that is destroyed, it doesn’t take long for the rest of civilization to follow the same path, as we now witness daily.

There are a lot of fly-over women out here. Many of us feel alone, overwhelmed, exhausted, and unseen. But we will continue to raise our families as best we can, however imperfectly, navigating the constant messaging and policies out of step with our own values and beliefs, because we know that without strong families, what’s left of civilization will collapse overnight.

Those who deny supernatural forces become slaves to earthly force. 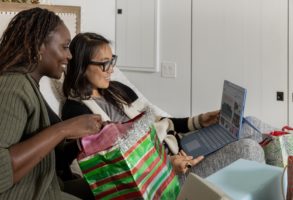 What most of feminism’s adherents have missed is that the first feminists asked the wrong question. As it becomes more patently obvious that many of our mediating institutions are antagonistic toward our core values, we must become even more vigilant about the formation of our children.