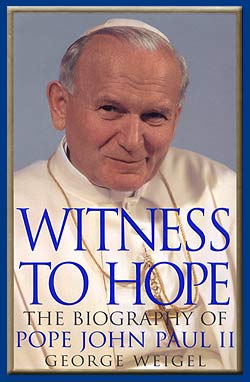 EPPC was pleased to host a free public showing of Witness to Hope, the 2001 documentary based on the definitive biography of Pope John Paul II, written by Senior Fellow George Weigel.

The documentary was preceded by remarks from Radek Sikorski and Michael Novak, both of the American Enterprise Institute. Mr. Sikorski, a Polish political refugee in the 1980s, was later Poland’s Deputy Minister of Defense (1992), Deputy Minister of Foreign Affairs (1998-2001), and the secretary of foreign affairs of the Polish Solidarity Party (1999-2002). Mr. Novak, a member of the board of the National Endowment for Democracy, was the U.S. ambassador to the Conference on Security and Cooperation in Europe (1986) and the ambassador to the UN Human Rights Commission in Geneva (1981 and 1982). A prolific and well-known Catholic author, Mr. Novak was just back from Rome, where he attended the funeral of John Paul II.

Unfortunately, George Weigel was unable to join us — he was still in Rome, commenting for NBC on the upcoming papal conclave. But copies of the new memorial edition of Witness to Hope were available for purchase, as well as copies of Mr. Weigel’s brand-new book The Cube and the Cathedral.