The Faith Angle Forum will hold its semi-annual Conference on Religion, Politics & Public Life from November 16-18, 2014, in South Beach, Florida. The series brings together a select group of nationally respected journalists and distinguished scholars for in-depth discussions of cutting-edge issues at the intersection of religion and public life. Under the leadership of Michael Cromartie, Vice President at the Ethics and Public Policy Center, the Faith Angle Forum provides extended discussion and the kind of deep reflection that is not always possible in today’s fast paced world of breaking news.

“Religious Conflict and the Future of the Middle East”

“Why Social Scientists (and some journalists) Don’t Get Religion”

Christian Smith, Professor of Sociology and Director of the Center for the Study of Religion and Society, University of Notre Dame

“Christianity and Science: Current Disputes among the Faithful”

Jeff Hardin,  Professor and Chair of the Department of Zoology, University of Wisconsin

Elliott Abrams is senior fellow for Middle Eastern Studies at the Council on Foreign Relations (CFR) in Washington, DC. He served as deputy assistant to the president and deputy national security adviser in the administration of President George W. Bush, where he supervised U.S. policy in the Middle East for the White House. Mr. Abrams was educated at Harvard College, the London School of Economics, and Harvard Law School. After serving on the staffs of Sen. Henry M. Jackson and Daniel P. Moynihan, he was an assistant secretary of state in the Reagan administration and received the secretary of state’s Distinguished Service Award from Secretary George P. Shultz. In 2012, the Washington Institute for Near East Policy gave him its Scholar-Statesman Award. He is the author of four books, Undue Process (1993), Security and Sacrifice (1995), Faith or Fear: How Jews Can Survive in a Christian America (1997), and Tested by Zion: the Bush Administration and the Israeli-Palestinian Conflict (2013); and the editor of three more,Close Calls: Intervention, Terrorism, Missile Defense and “Just War” Today; Honor Among Nations: Intangible Interests and Foreign Policy; and The Influence of Faith: Religion and American Foreign Policy. 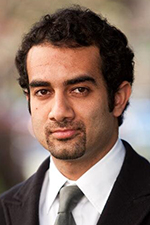 Shadi Hamid is a fellow with the Project on U.S. Relations with the Islamic World in the Center for Middle East Policy at the Brookings Institution. His most recent book is Temptations of Power: Islamists and Illiberal Democracy in a New Middle East (Oxford University Press, 2014). He served as director of research at the Brookings Doha Center until January 2014. Prior to joining Brookings, Hamid was director of research at the Project on Middle East Democracy (POMED) and a Hewlett Fellow at Stanford University’s Center on Democracy, Development, and the Rule of Law. Hamid is currently vice chair of POMED, a member of the World Bank’s MENA Advisory Panel and a contributing writer for The Atlantic. Hamid has also served as a program specialist on public diplomacy at the U.S. State Depart­ment and a legislative fellow in the office of U.S. Senator Dianne Feinstein (D-CA). His articles have appeared in The New York Times, The Washington Post,  The Atlantic, Foreign Policy, The New Republic, Slate, Forbes, The National Interest, Policy Review, Democracy: A Journal of Ideas and many other publica­tions. Hamid received his B.S. and M.A. from Georgetown University’s School of Foreign Service, and his Ph.D. in political science from Oxford University.

Jeff Hardin is a professor and chair of the department of zoology at the University of Wisconsin-Madison. Hardin holds a Ph.D. in biophysics from the University of California, Berkeley. His numerous research articles focus on the genetic regulation of cell movement and cell adhesion during embryonic development, which has broad implications for understanding human birth defects and cancer.  He is also a nationally and internationally recognized biology educator, and the senior author of a widely used cell biology textbook, The World of the Cell(Pearson). Hardin is the only scientist in the Religious Studies program at the University of Wisconsin-Madision, where he is the director of the Isthmus Society, which is committed to promoting dialogue between science and religion.

Christian Smith is the William R. Kenan, Jr. Professor of Sociology and Director of the Center for the Study of Religion and Society at the University of Notre Dame. Smith’s research focuses primarily on religion in modernity, adolescents, American evangelicalism, and culture. Smith received his MA and PhD from Harvard University in 1990. Smith was a Professor of Sociology at the University of North Carolina at Chapel Hill for 12 years before his move to Notre Dame. He is the author of several books including: What Is a Person? Rethinking Humanity, Social Life, and the Moral Good from the Person Up (Chicago); The Secular Revolution (California); Moral, Believing Animals: Human Personhood and Culture (Oxford); and Christian America?: What Evangelicals Really Want (California). Smith has also co-authored several books including: Souls in Transition: The Religious and Spiritual Lives of Emerging Adults (Oxford); Soul Searching: the Religious and Spiritual Lives of American Teenagers (Oxford); and American Evangelicalism: Embattled and Thriving (Chicago).