The Fractured Republic: Renewing America’s Social Contract in the Age of Individualism

Americans today are frustrated and anxious. Our economy is sluggish, and leaves workers insecure. Income inequality, cultural divisions, and political polarization increasingly pull us apart. Our governing institutions often seem paralyzed. And our politics has failed to rise to these challenges. 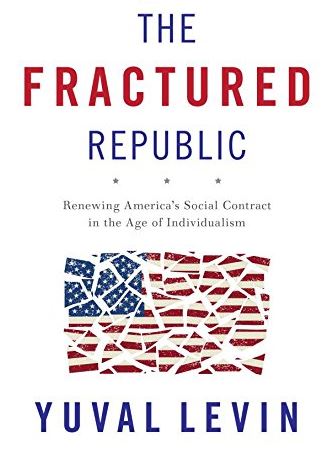 No wonder, then, that Americans–and the politicians who represent them–are overwhelmingly nostalgic for a better time. The Left looks back to the middle of the twentieth century, when unions were strong, large public programs promised to solve pressing social problems, and the movements for racial integration and sexual equality were advancing. The Right looks back to the Reagan Era, when deregulation and lower taxes spurred the economy, cultural traditionalism seemed resurgent, and America was confident and optimistic. Each side thinks returning to its golden age could solve America’s problems.

In The Fractured Republic, Yuval Levin argues that this politics of nostalgia is failing twenty-first-century Americans. Both parties are blind to how America has changed over the past half century–as the large, consolidated institutions that once dominated our economy, politics, and culture have fragmented and become smaller, more diverse, and personalized. Individualism, dynamism, and liberalization have come at the cost of dwindling solidarity, cohesion, and social order. This has left us with more choices in every realm of life but less security, stability, and national unity.

Both our strengths and our weaknesses are therefore consequences of these changes. And the dysfunctions of our fragmented national life will need to be answered by the strengths of our decentralized, diverse, dynamic nation.

Levin argues that this calls for a modernizing politics that avoids both radical individualism and a centralizing statism and instead revives the middle layers of society—families and communities, schools and churches, charities and associations, local governments and markets. Through them, we can achieve not a single solution to the problems of our age, but multiple and tailored answers fitted to the daunting range of challenges we face and suited to enable an American revival.

Praise for The Fractured Republic

Kirkus Reviews
“Refreshingly optimistic; in our diversity lies great strength, Levin writes, a strength that can be tapped once all the rancor is put aside. Highly recommended for readers of whatever political stripe.”

Representative Paul Ryan, Speaker of the US House of Representatives
“Yuval Levin is one of the most insightful and original thinkers of our time. In this book, he shows why conservatives are best-equipped to help Americans navigate this new and fragmented world we’re in. This is required reading for anyone interested in saving the American Idea.”

Peggy Noonan, columnist, The Wall Street Journal
“Yuval Levin’s thinking is serious, substantive, and deeply informed, yet his tone is always heartening and serene. His style itself is an element of his thought. The Fractured Republic helps us think clearly about this moment in the life of our country that almost refuses to be clearly understood. He finds solutions in the best of the American tradition. Our weaknesses, he says, are only the opposite side of our strengths. Anyone looking for a realistic source of hope will find it here.”

Jonathan Haidt, author of The Righteous Mind
“What on Earth has happened to our country? This is the question of the decade, and Levin offers the most compelling answer. His history and sociology are magisterial. Whatever your politics, after accompanying Levin on this grand tour, you’ll leave behind failed partisan frameworks and see our recent past—and therefore our future—in a new and more hopeful light. This is the book America most needs to read in 2016.”

George Packer, author of The Unwinding: An Inner History of the New America
“Yuval Levin is the most interesting American conservative writing today. He starts from assumptions and commitments that I don’t share, but The Fractured Republic persuaded me on many counts as both description and vision. Levin’s writing is sharp, subtle, and humane. His work gives the sense that our future needn’t be as grimly divided and dysfunctional as the present seems.”

Francis Fukuyama, professor of political science at Stanford University and author of Political Order and Political Decay
“Yuval Levin, one of the most acute observers of social policy, locates our current political unhappiness in the backward-looking nostalgia of both right and left for a mid-20th century America that will never be recovered. His proposed solution—acceptance of our fundamental diversity through the strengthening of mediating institutions—is an important one that deserves to be heard amidst our current partisan wrangling.”

Yuval Levin is the editor of National Affairs and the Hertog Fellow at the Ethics and Public Policy Center. He is a contributing editor to National Review and the Weekly Standard, and his writings have appeared in numerous publications including The New York Times, The Washington Post, The Wall Street Journal, Commentary, and others. He holds a Ph.D. from the Committee on Social Thought at the University of Chicago and has been a member of the White House domestic policy staff (under President George W. Bush) and a congressional staffer. He is the author, most recently, of The Great Debate: Edmund Burke, Thomas Paine, and the Birth of Right and Left (Basic, 2013). He lives in Maryland.