Not Forgotten: Elegies for, and Reminiscences of, a Diverse Cast of Characters, Most of Them Admirable 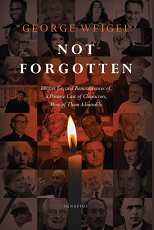 In his new book, Not Forgotten: Elegies For, and Reminiscences Of, a Diverse Cast of Characters, Most of Them Admirable, EPPC Distinguished Senior Fellow George Weigel offers a collection of remembrances of fascinating personalities ranging from Pope St. John Paul II to Jackie Robinson to Charles Krauthammer to Daniel Patrick Moynihan – and many more.

Mr. Weigel is an EPPC Distinguished Senior Fellow and holds EPPC’s William E. Simon Chair in Catholic Studies. His twenty-eight books include the two volumes of his internationally-acclaimed biography of Pope St. John Paul II, Witness to Hope and The End and the Beginning.

“Through his perceptive insights and crystalline prose, George Weigel is a peerless chronicler of the most consequential people and ideas of our time. In Not Forgotten, he continues the fine work that has earned him a wide and attentive audience,” said EPPC President Ryan T. Anderson.

“In these deft summations of lives to remember, George Weigel displays his distinctive blend of philosophic sophistication and humane sympathy,” writes Pulitzer Prize-winning columnist George F. Will. “His farewells—mostly fond; a few bracingly acerbic—are an intellectual feast to be nibbled now and then, or consumed in one sitting. Either way, readers will be nourished.”

Not Forgotten is an extensive compilation of impressive individuals from Mr. Weigel’s personal circle and those he admired from a distance. The common thread, as he writes in the preface, is that “each of the people I’ve memorialized has something to teach us today about righteous and noble living … although a few of them teach those lessons along the old via negativa.” Whether Mr. Weigel is sketching the lives of history-making popes like St. John Paul II; major league baseball figures like Jackie Robinson, Frank Robinson, and Earl Weaver; fellow writers and media personalities like Cokie Roberts, Charles Krauthammer, and William F. Buckley, Jr.; or consequential politicians like Lindy Boggs, Henry Hyde, Sargent Shriver, and Daniel Patrick Moynihan, he helps readers to understand the deep truths of the human condition illuminated by each of these not-forgotten lives.

Written with verve, insight, and an appreciation for the consequential lives that have touched his own, Not Forgotten fills out the autobiographical portrait that George Weigel began painting in Lessons in Hope: My Unexpected Life with Saint John Paul II, while offering a backstage view of some of the men and women who have shaped the turbulent history of our times.

More Praise for Not Forgotten

“What a cast of characters! And what a feast, presided over by George Weigel’s wide-ranging, civilized intelligence and his astonishing talent for friendship. The book is a pure delight.”
— Lance Morrow, EPPC Henry Grunwald Senior Fellow and author of God and Mammon: Chronicles of American Money

“Moving and delightful, the reminiscences in Not Forgotten prove once more that George Weigel has not only a mind of the very first order, but the heart to match.”
— Mary Eberstadt, author of Primal Screams: How the Sexual Revolution Created Identity Politics

“These sketches—most of them brief and, by turns, elegiac, celebratory, or bemused—serve as a kind of catalogue of recent intellectual history, Catholic and otherwise, in America and elsewhere. It’s a book for dipping into, assuming you can put it down.”
— Andrew Ferguson, Contributing writer at The Atlantic and author of Land of Lincoln

“Each of these sixty-eight essays is a little masterpiece in the difficult art of the eulogy; together they are a mosaic of the joys and sorrows of our times. Weigel’s miniatures—insightful and compassionate, celebratory and cautionary—are vivid reminders that we do indeed live among a cloud of witnesses.”
— Mary Ann Glendon, Learned Hand Professor of Law, emerita, at Harvard University and former U.S. Ambassador to the Holy See

“In these lively portraits of friends and mentors, George Weigel bestows on them—and his readers—a garland of gratitude for gifts of comradeship freely given and received.”
— Kenneth L. Woodward, former Religion Editor of Newsweek and writer-in-residence at the Lumen Christi Institute at the University of Chicago